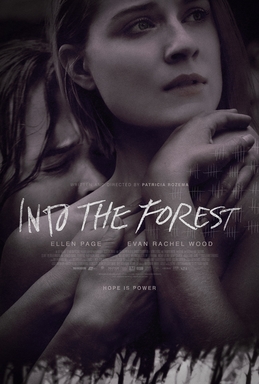 Note: This post may contain spoilers for the movie Into the Forest.

Last night we saw the movie Into the Forest, starring Ellen Page as Nell and Evan Rachel Wood as Eva, two sisters who learn how to survive without electricity. Post-apocalyptic is one of the genres thrown about when describing this movie, but I saw the evolution of what was happening in the movie as more positive, Arcadian, something to really think about.

The movie is based off the novel of the same name by Jean Hegland, published in 1998. In the novel the sisters resided in Northern California, but the movie was filmed in the enchanted rainforest of British Columbia, north of where I live. Having hiked and run in, and studied this area for several years–the ecology, biology, geography–I felt at home viewing the deep forest of the movie with the old-growth land mass; magnificent cedars, hemlock, and firs; and sweet, life-renewing rains.

The beginning of the story shows a sort of dreamy place and time of life, with the two girls studying hard for their futures (Eva is a dancer, Nell wants to go to college). They live in a beautiful, secluded home in the forest with near-future hints of some solar power and more advanced screens than we have currently. Eva’s dance movements flow like liquid art against the large glass windows’ forest views.

But then the electricity goes out all over the West Coast, and perhaps everywhere. Little information is given about the nature of the apocalyptic event. Day by day come new challenges and new education about how to survive. One trip into town shows that societal breakdown in the form of looting and gun security is already taking place. Then weeks go by, and then months.

Several harrowing things happen during this time, but the nature of the story is very character-driven and mesmerizing. As with many well-told stories, the gist of this one is love. The sisters’ love for each other builds their character, despite their downfalls and weaknesses. We know that bad things may happen in life, as may bad people, but personal strength grows in the worst circumstances.  Similar to old-growth trees reaching a steady, or climax, forest by way of fallen trees providing rich nutrients, so do these sisters grow stronger from bad experience and fallen people. As I watched the movie, I was caught off-guard multiple times by the terrific acting–not melodramatic but genuine, raw emotion that I have felt myself in similar events.

Fugue state is mentioned early on as Nell studies for her SAT exams and needs to remember definitions of words, and this sets a metaphor for the movie. The lack of electricity subsequently leads to the downfall of globalization–the lack of ability to transport, consume, communicate, and otherwise interact with the rest of the world. The fugue state in this movie is the development of a new identity without the world as a backdrop–with the local habitat being the only resource for living.

Fortunately, Eva and Nell live in a forest, a lush rainforest in this case, which provides enough resources for survival (meat, plants, fruits, wood for fire and shelter). The umbilical cord to their previous identity and its ghosts is the physical house in which they currently reside and have for seemingly years, perhaps all their life.

Going into the forest is the final act of entering the fugue state–a new identity–when something happens to the house, which is enough spoiler for now. New life is in the air, and is not just a departure from a “better” world but the entrance into a newly identifiable realm, which–implies the story–was better at one time and can be better again.  Eva and Nell discuss how long electricity has been around during the time of humans have occupied the Earth, and the answer is about 140 years out of 200,000. Going into the forest is an act of freedom, love, and happiness after all. It’s how we lived for 99.03% of our existence.

I found the movie brilliantly told and acted. I have not yet read the book, but it’s on my list now.  The story underlines what I feel is in the subconscious of many people in the world today, and that is our collective memory (genetic or understood) of whatever connections we or our ancestors have or had to a more natural world.  It is this kind of life I am always thinking of–which is in my conscious every day. When I go into the forest to run on the trail, it is a way to relish that identity inside that I am increasingly establishing as an essential part of me. I wondered, after watching that movie, if I could live in the wild today. Of course, I think it would be possible, but without a rewilding of the modern world, most resources are, or will no longer be, abundant–like fresh water, animals, wild plants, fish, birds, etc.

I should be thankful that in my lifetime I still have the trail to run on that is full of trees, wildlife, and birds. Tonight after work I will go into that magical rainforest and revel in it–a wonderful, large, mystical place!

Feature image: By Source – Fair use