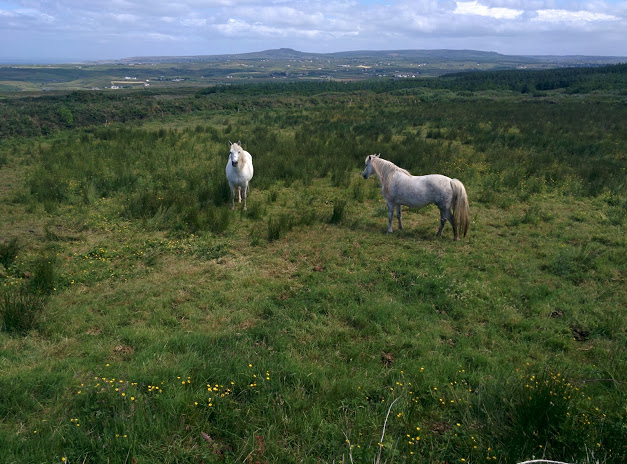 The Ireland vacation now seems like a magical dream. We planned the trip some time ago simply so that my mother could visit her ancestors’ homeland and her own dream “place to go in life” before she got too old. It is a place that I have always wanted to go as well, mainly being inspired by Yeats’ poetry. And when it came time to plan this summer holiday, many of the places we visited were because of Yeats’ early poems and his dreaming of nature while in the city–including the woods mentioned in “The Lake Isle of Innisfree” and “The Stolen Child,” among others.

But first things first. What greeted us upon arrival in Doolin, after a drive from Dublin and a stop in Limerick, was a simple cottage on a small lane, surrounded by foxglove, thistle, buttercups, daisies, and rolling pastoral country–along with the shrouded view of the vast Atlantic. Pockets of woodlands rose up here and there, nothing like the great rainforests of home, but beautiful nonetheless. Also greeting us  next to the cottage were the gentlest white horses, which were very friendly–coming up to say hello and eat grass out of our hands every day.

We had no big agenda other than to have a good time, but there were two particular places I wanted to run. One was the Dromore Wood, and the other was the area around the Lake Isle of Innisfree (Lough Gill). We were able to run in areas Yeats had inspired me (Slish Woods) and other most magnificent areas like above the Cliffs of Moher. We also hiked in the Burren for an afternoon following a morning run, and I was amazed at all the flowers poking through groundcover stones and the marshes.

Perhaps the most amusing run was when my husband dropped me off at one of the trail starts above the cliffs. Here, the first thing I saw was a bull pen and a sign that said “Beware of the Bull.” In that same pasture, however, was a trodden path and I could not tell if that was the trail that met up with the Cliffs of Moher trail. Another possibility was a path that was beyond a fence, but to get to that trail I had to climb under the fence without touching it (being electric). Here is where I got a case of stinging nettle on my wrists and legs. I only look back now with amusement; at the time I was frightened of bulls and being shocked. Finally some hikers came along, and together we navigated how the trail actually went. It was, it turned out, through the pasture, but luckily there was no bull.

Running along the cliffs was extraordinary and exhilarating. I ran up the trail once. On a different day I got to run down it to Doolin (about 5-6K each way). The trail itself was not all that great for footing. It was narrow in many places, and I occasionally met hikers coming up the other way. So, as with the very narrow roads in Ireland, you just move over, smile, and let the others pass. In many areas, the cliffs were directly below on my left and an electric fence on the right. There were some more precipitous areas with wobbly rocks and little rock bridges over running waterfalls leading to the Atlantic far below. And even with wider areas, the numerous stones of Ireland jutted up precariously. Once I tripped over a rock and felt myself in slow motion fumbling forward. Somehow I caught myself and didn’t fall. I am sure I just looked so graceful, however.

Still, I can barely describe the feeling I had of being up there, gazing at the wandering sea and cliffs of legend to my left and cows and green pastures on my right, along with the occasional megalith or ruins. This was probably the most wondrous run in my life. Just the snapping reality of “Wow, I am here, in Ireland, running atop the Cliffs of Moher” was so surreal. I was by myself except for the occasional hiker, and there was a looming sense of that lovely solitary experience in the wild that I often get. Ireland preserves so much of its cultural history as well as its environment, so in that sense I felt too that I was in an older place in which time had stopped. That I was seeing vistas that first peoples had experienced filled me with a wondrous sense of awe.

In one of our last days we took the boat over to the Cliffs of Moher, so I was able to get a great vantage point from the other side of the cliffs. As we sailed up to the 700-foot high giants, made of Namurian shale and sandstone, we stopped at the Branaunmore seastack, a rock tower, and on this rock and on the cliffs, the closer we edged up, we were able to see thousands of seabirds that live on the rocky edges. Puffins and razorbills, among 18 other species of birds, squawked in chorus in this crazily magnificent ecosystem that seems lost to the world; even to us, living there for two weeks, we did not see the birds until we encountered them closeup from the boat.

Going to Yeats’ country filled me with so much wonder and memory of reading his poems throughout the years. In one day we drove from Doolin up to Sligo and back, taking in Parke’s Castle, a run in Slish Wood (known as the Sleuth Wood in Yeats’ “The Stolen Child”) and a boat around the lake. The lake tour passed “The Lake Isle of Innisfree,” which is a real island on Lough Gill, and the tour guide pointed out Yeats’ references to Slish and Hazel Woods. We took the Rose of Innisfree, and the captain quoted Yeats while his wife served wine and tea. I just wanted to plug that boat service for anyone wanting to see a piece of poetry history.

My other runs were local. The first time I went down the lane where our cottage was, as I was running back I was amazed at the pure isolation up there, the feeling of being in a very old place, where an ancient country still existed. I had actually gone up the lane and then down another lane that was nothing but tire tracks in mud running past a grove of trees. As I was running back to the cottage later, I had the distinct feeling Gandalf would be heading down the lane at any moment, grinning merrily and greeting me with a twinkle in his eye.

Our trip had plenty of running and hiking, but we also visited old ruins. We went up to Galway one day and, on the last day, spent a night and day in Dublin and visited Christchurch and the Catacombs. While an interesting piece of history, what made me giggle was the framed-behind-glass mummified remains of a cat and a rat found in organ pipes. Upon its caption reads, “…As stuck as that cat to that mouse in that tube of that Christchurch organ…” (from James Joyce’s Finnegan’s Wake).

And besides the outdoors and very few inside places we visited (like the Doolin Cave), there were, of course, the pubs. Since we were staying near Doolin, we hit up all the pubs except for one. At McGanns one night we stayed late enough for the music and sat in a packed room, drinking beer, talking with a man from Switzerland and his wife–it was standing room only, and people sat at any empty table or on any available stool. We really love the Irish music–you can hear similarities in Appalachian music, where my mother is from; it’s akin to some of the bluegrass fiddle and banjo music we grew up with. It’s all dear to my heart.

The entire trip was the most memorable thing I’ve ever done. From listening to the strong winds blow in from the Atlantic, which shook our cottage nightly like a chorus of ghosts, to waving to the most ancient men moving their cows to new pastures along the same road we drove on, to smelling the peat burning in fireplaces at night, the experience was beyond words. I had many dreams forming while there. I could envision my “cottage by the lake” there, in Ireland. I would move there in a moment, but it’s even further away from family. I could envision learning how to play the fiddle, but to be realistic, I should probably master better the guitar I already have. Visiting the Cliffs of Moher and rereading some of Yeats, I realized also exactly where my novel is going. I miss the fragrant countryside, the feeling of tranquility, the pastoral green hills, the old ruins and mega/monoliths, the friendliness of everyone, the open arms to visitors, the tinkling of mugs toasted to strangers, and the way horses and cows eyed us with big doe tenderness as we passed down their lanes. But most of all, I miss that feeling of flying down a trail above the cliffs and through gentle woods with castle ruins while winds wiped my sweaty brow.