I feel continually impressed and happy about our life here in Nova Scotia. Sometimes I do miss the rainforests back in British Columbia, and all the beautiful mountains at the backdrop of every glance, but here it is freer, more spacious, full of forests and freshwater lakes, everywhere the eye can see. The density of houses and crowds where we live is so much less than the sprawling, crowded suburbs of Vancouver. Looking back, I don’t know why people would pay that much to live in a place that’s so compact when you can live near an even wilder ocean with actual room to move about, and where housing is actually affordable. I always thought of Vancouver as a rich person’s playground; that’s not the place for me. 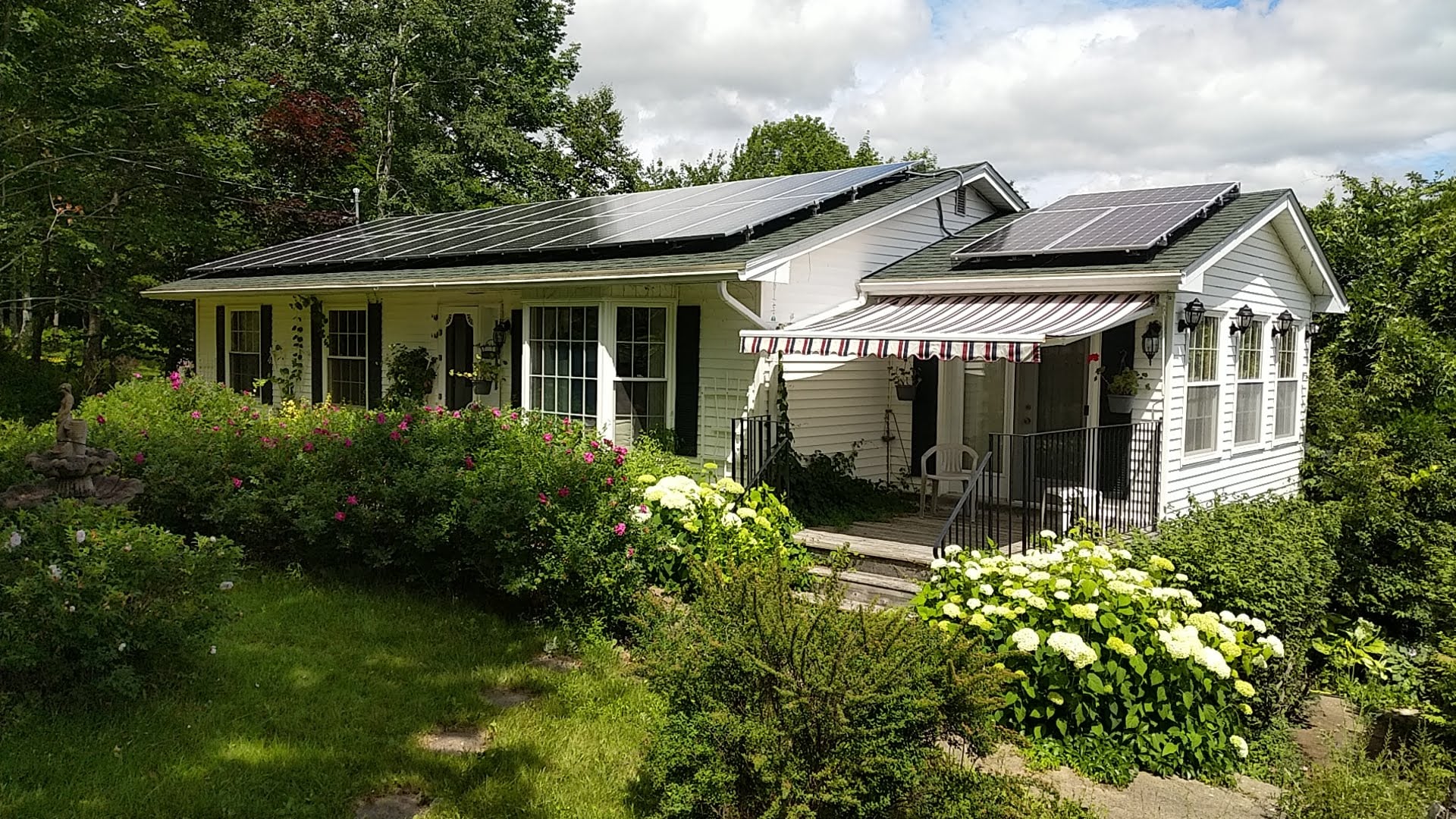 Solar panels, and yes the vines on the sun porch are crazy and I need to go out and trim them!

So here it is, almost September, and many of the projects I’ve blogged about are complete: 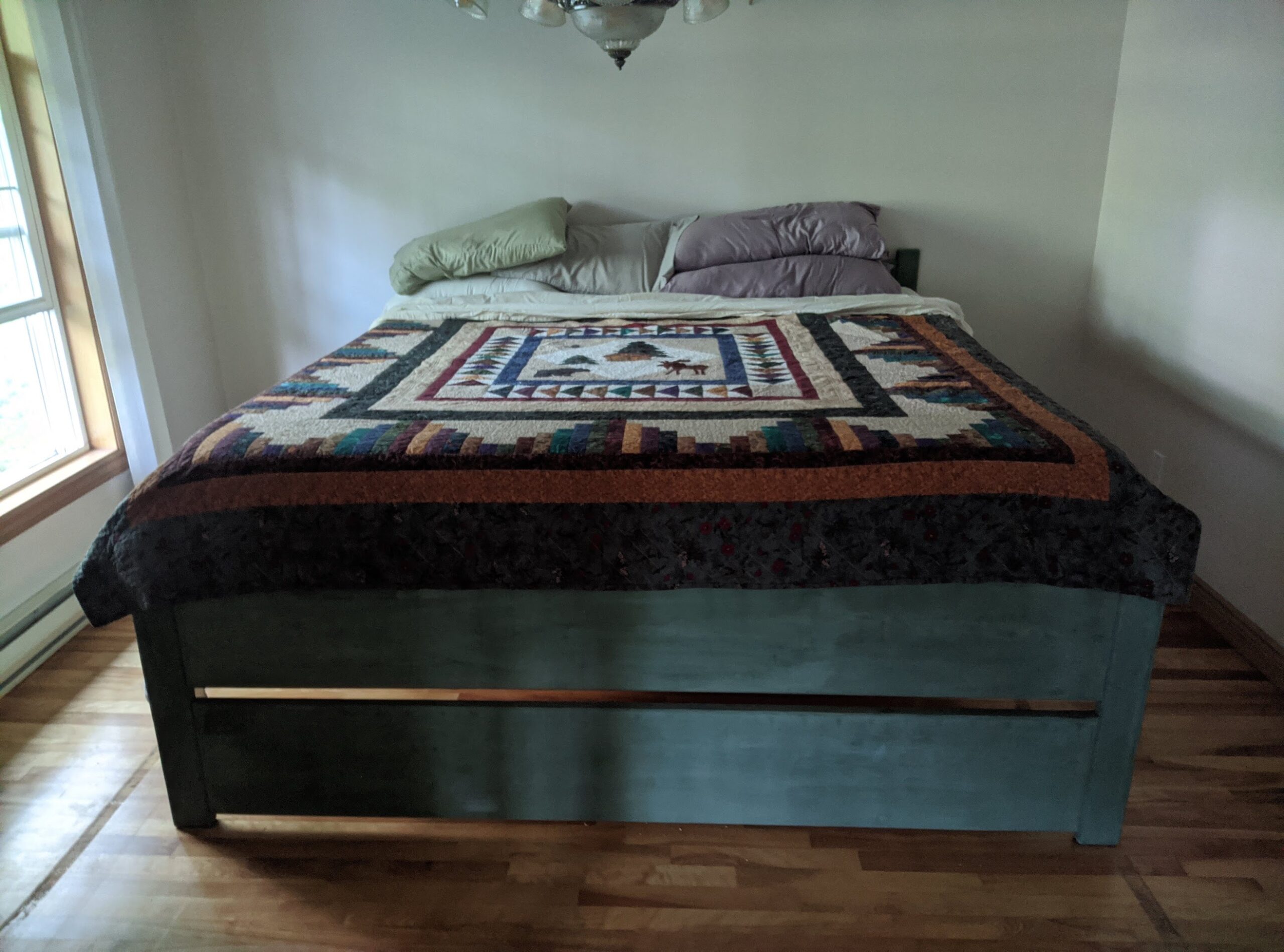 Morgan built this bedframe, and we finally put it together and moved into the room, which we had recently repainted. We have since removed the glue on the floor, which had held down a rug. This room will eventually be a library (an extension to our living room) once we’re able to move the bedroom back down to the basement.

It feels good by the end of summer to have these things finished, though there’s still more to do. We have an area when you walk in the front of the house that’s a big, rectangular room separated by a step and some wooden railings. On the right is the living room, and on the left the previous owners used that as a dining room. But to us, it felt too far removed from the kitchen. There’s a room right next to the kitchen (sun room), which we were mulling over how to use it, and realized that would be the new dining room and the old dining room would be made into a library or sitting room, just an extension to the living room. However, right now our bed is in there because we discovered mold in the basement, including the room where we were sleeping. We’ve killed and cleaned the mold but were worried about leaks. We had two reno people come in, who wanted to tear out the floors and walls to investigate further, but two other guys (one being the original inspector of our house) looked around and said that the investigation we’ve done in the walls and under the flooring shows no water leakage. It’s just incredibly humid here in the summer, and some mold becomes a problem when people aren’t completely dehumidifying and venting their entire basements. The dehumidifier that came with the house runs all the time, but it’s not sufficient for the size of the basement and the many rooms down there. So we’re ordering a commercial dehumidifier and will do the venting of the rooms ourselves. Once we get all this done, I am renovating our bedroom down there–taking off some ugly mirrored doors on the closet, hanging up some drapes there instead, and hanging fairy lights. We need to repaint a different room and add some baseboards (the previous owners finished the basement completely but left a couple projects undone); we’ll turn that room into a den. Another room will be a guest bedroom, and the other is just a smaller room where the cat litter is. The other basement room is a utility and storage room with washer and dryer. There’s also a bathroom in the basement, which was the other project left unfinished. The previous owners installed a shower in there and did finish it but neglected to sand and paint the outside of it. Eventually, we’ll get things finished (the joy of home ownership!), but really the house is beautiful, even the basement, where they did some crown molding (like upstairs on the main floor) and used a waterproof and not terrible looking vinyl for the flooring.

I think these other projects will move into later fall and winter, however. We’ve accomplished a lot this summer, and I’ve grown to find sanctuary often in the back meadow, which is where the new trees are. There are also thousands of wildflowers, bees, and other insects back there. A mama deer and two fawns often come lazily into the yard, lately to munch on berries (we have wild grapes and elderberries, and the neighbors have blackberries),  wildflowers, grasses, and apples that have fallen from the trees early–we think from stress caused by the heat waves this summer. We just kinda have the attitude that we’ll leave the yard wild and attract the wildlife, because there are so many natural landscapes that are being diminished in the world.  It’s not like we could possibly eat all those apples, cherries, and pears back there anyway. Having come here on the tip of the pandemic and finally getting settled in during our snowy spring was a little weird, for sure. But summer has a way of providing solace and beauty as the living things are all chattering, eating, flying, mating, laying eggs, pollinating, and singing in the meadow. I finally hung my fairy lights on the back deck, which overlooks the gardens, meadow, and dramatic sunsets we’ve been having. During the day, it’s been very hot and humid, but nights cool down significantly, and millions of stars appear. One night we were having a bonfire, and I saw a shooting star. It’s another plus about the east coast; the skies are sunnier during the day, and clearer at night, than they were back in Vancouver. Sometimes I just go sit on the deck and watch the sunset and then the stars come out one by one. Choruses of crickets sing their songs in the background while the air cools significantly, enough for a jacket. Yes, this summer has been beautiful, and I’m sad that it will soon end.

Yesterday seemed to distinctly mark the start of autumn, not just in weather but in terms of preparation we’re doing for this winter. We decided to use the rebate from our solar panels to get a wood stove, since it’s not a matter of if but when the power will go out here in the winter. Living in the Maritimes means that winds are often strong and crazy. It snows a lot here, and gets pretty cold, though I think the interior provinces without a regulating ocean next to them get the coldest weather in Canada. Still, we have to stay warm and even have a cooking source if the power goes out, thus the wood stove. We chose the one that was most environmentally friendly, is EPA certified and nearly carbon neutral if you buy local wood, which we do. Come to think of it, with our solar panels and driving an EV, I guess we’re kind of where we dreamed of being. I remember a conversation Morgan and I had a few years ago as we sat on the front balcony at night back in the Vancouver area. We’ve always been very conscious about preserving natural resources the best we can, but back then we had decided to someday buy an electric car and until then to just walk or take public transit everywhere, which we did. Anyway, the wood stove got installed, and just coincidentally a cord of wood was delivered yesterday too, as if to say, “Nights are getting colder!” It took us many trips to stack the wood, but we finally got it done and just need one more tarp to cover half of the stack. Speaking of walking, I haven’t done much since being here, partially due to my left ankle problems but also because I stay so active in the yard doing things–but I did go on a 3km walk a couple days ago, found a hidden trail, and want to start doing these walks more and more. Next time I’ll head down to the nearest lake. 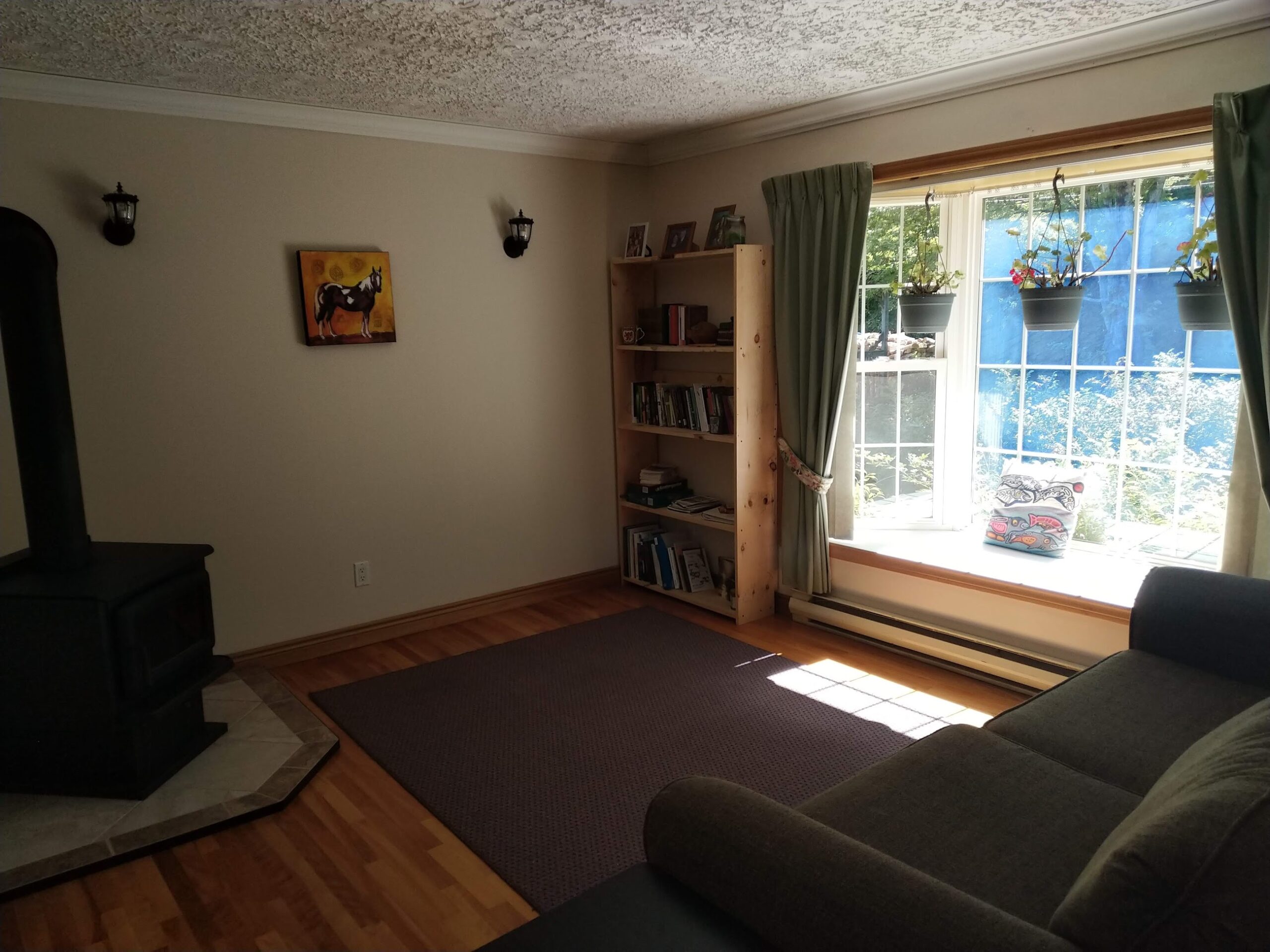 Wood stove is here! Also, that’s the bookshelf we made together on Monday this week. I’m sure we’ll replace this rug at some point or not use a rug. I really like the hardwood floors as they are. It’s just an extra rug we have from the previous owners. And I’d like to hang the horse painting somewhere else and put a larger picture there. We just don’t have the library room figured it out, so I’m holding off.

Firewood that we stacked yesterday

And then, as if these weren’t signs enough that fall is coming, we had a cold front move through last night, and it was lovely sitting in the cozy living room, watching the storms unfold around us. We needed the rain. It’s the first time we’ve had that much thunder and lightning, and I really missed thunderstorms, since we had zero of them on the west coast except for once in a blue moon we’d hear some thunder, like maybe once a year. It was beautiful yesterday, and I thought about the coming winter and my favorite season autumn. But I also hang onto the last vestiges of summer. I think we have another month or so of garden harvest, warm days, and lots of sunshine. Today it is finally cooler, only 22C with about 50% humidity. The winds lift outside, and the air is clean and whistling. The sky is blue, the sun is out. What more could I ask for?

These past weeks have been very creative for me as well. I finished my novella and licensed new art for it, and I’ve even begun to work on Up the River again, which should come out next year. I’d put that aside to finish Bird Song, and then re-read River again a couple nights ago and was impressed by it. Like that’s a book I would want to read. I think writers just develop over time and learn from old mistakes. I’m seeing this in my own writing–not to say it’s perfect by any means. I’ve also had time to read more books lately, which I usually talk about on Twitter. I’ve been applying for editorial jobs as well. Of course, now it’s a little hard to find work with Covid-19. I’m also working on new articles. One new article is the environmental fiction survey that I did. It’s finally done, and the results are in. Now I’m working on the second part to my Around the World in 80 Books Medium article from 2018. I really like writing these because the more I go along, studying ecofiction, the more I learn about it. The more I learn, the more I discover–novels from around the world, some of which I’d not known about. I think we always have to keep an open mind about what there is in the world that we did not know before that we can learn about, even accidentally, and how these discoveries can enhance our lives. 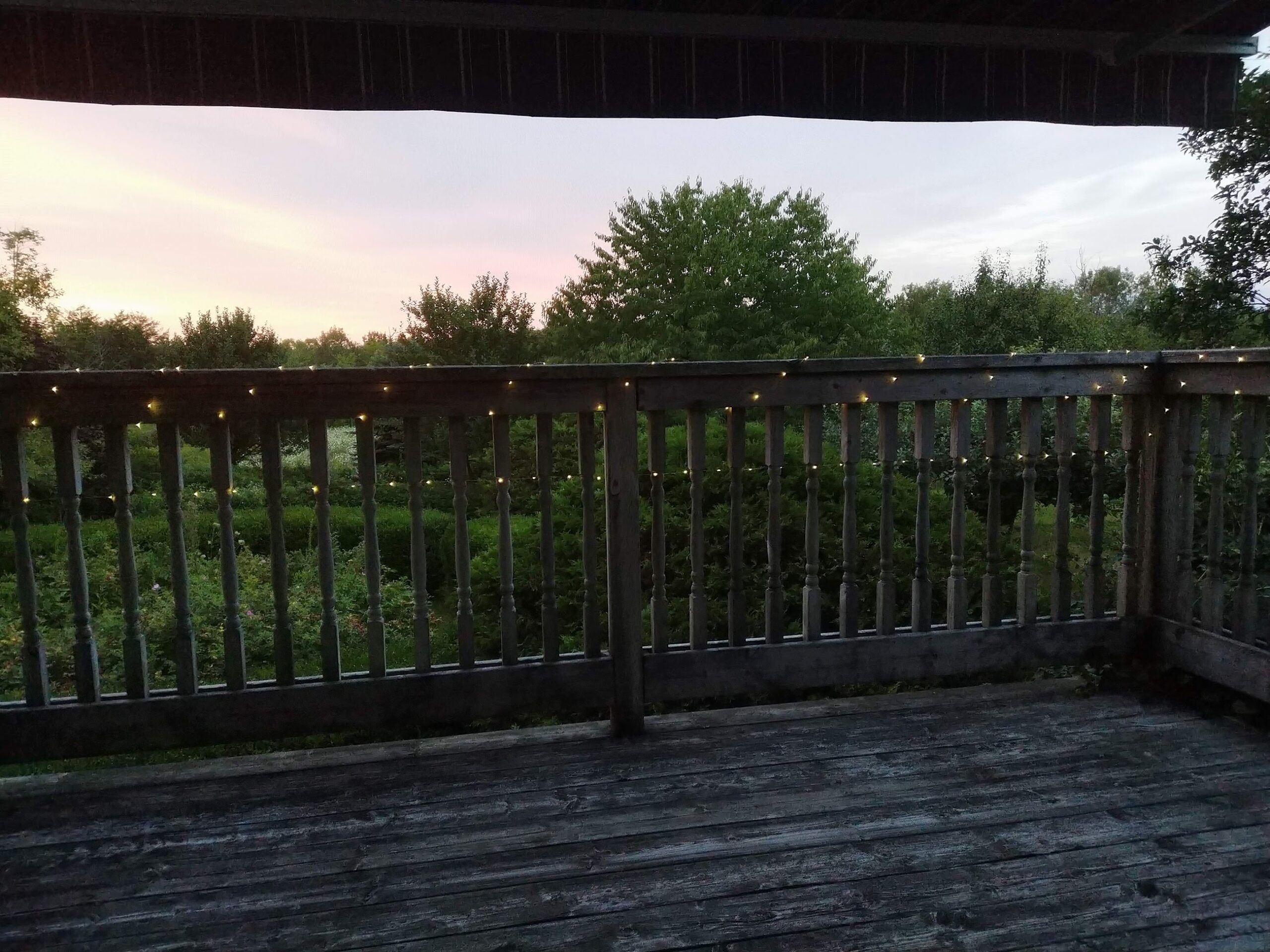 Loving life. Our deck with fairy lights, a great place to be in the evenings.