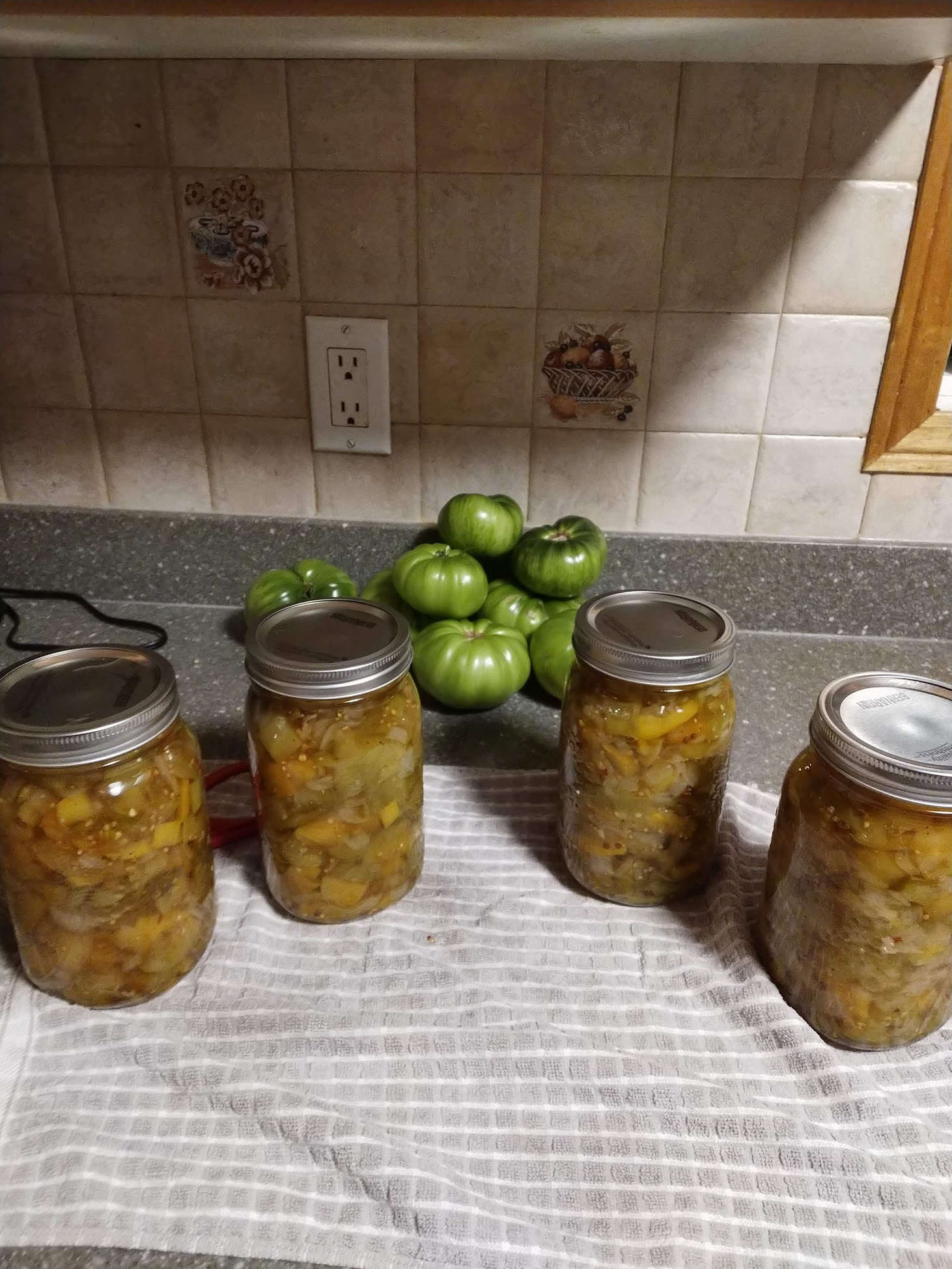 Thanks to our friends Kostia and Marina, who live five minutes down the road and are very generous, we have a ton of tomatoes. Hurricane Teddy hit a few days ago, but it was a post-tropical storm when it hit landfall and did not do a whole lot of damage here–some beautiful wind gusts though. So before the storm hit, everyone and their neighbors picked stuff from their gardens. I had already harvested everything from mine, except for some herbs that will be good for a while. Anyway, they gave us tomatoes, and we let them come and pick pears from our tree and rose hips in our gardens. So now we are trying to get through these tomatoes! Just ignore the room. We have been doing some reorg in there, which is why the mirror is on the floor–we had to take it down for the wood stove pipe to get threaded in from the living room and up to the roof away from our solar panels. Plus we’re going to be painting in there. This is the second batch of tomatoes they’ve given us, but the first batch wasn’t as big–enough for a big pot of spaghetti. 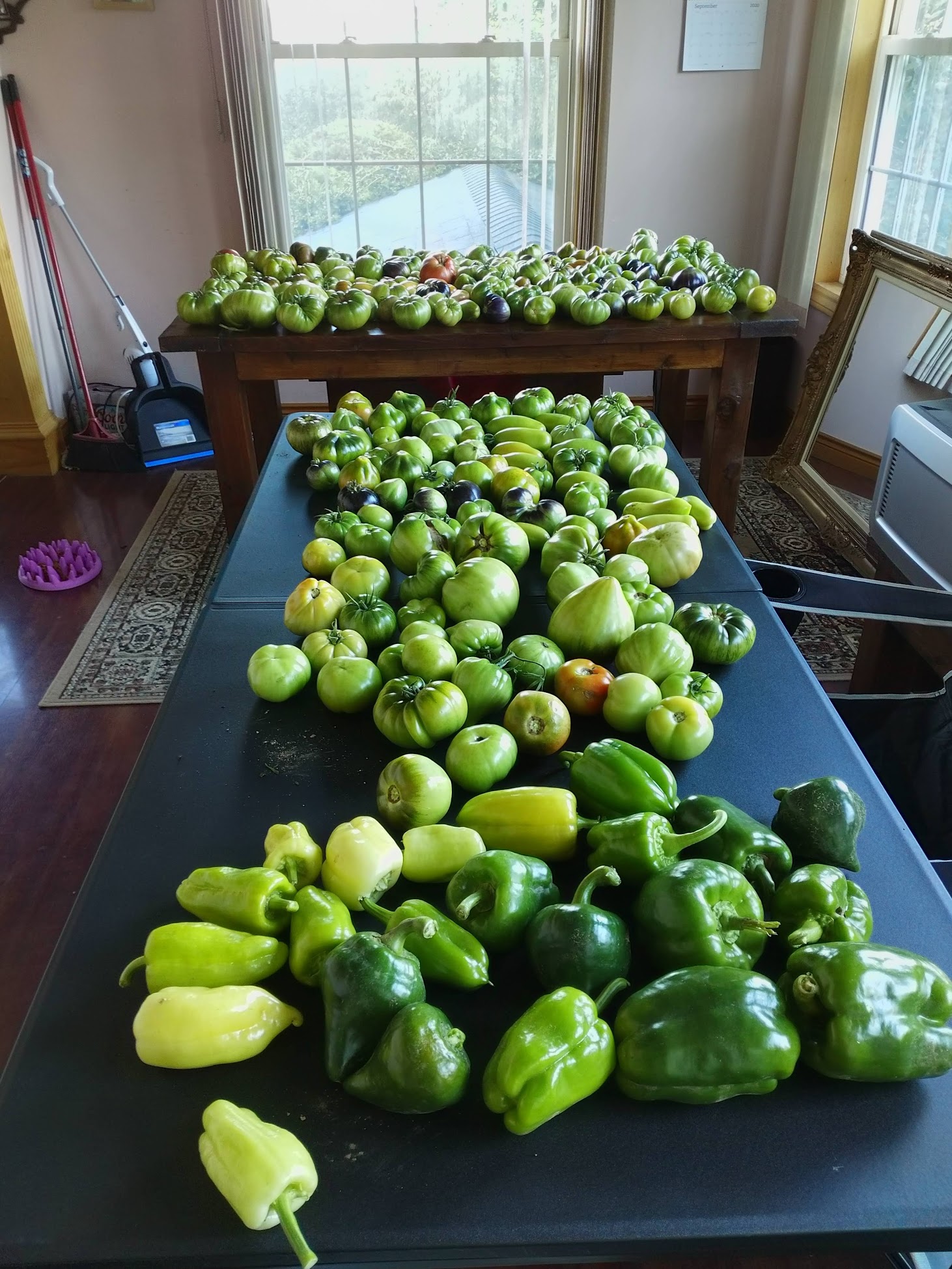 As you can see there are also some peppers!

There’s a lot of green tomatoes that did not ripen before the hurricane. But a lot of red tomatoes above that ripened after the photo was taken. So far with the red tomatoes I’ve made yet another huge pot of pasta sauce and some pico de gallo, which I just got done munching on and was delicious. And right now I’m cooking some tomatoes for a salsa later. The green tomatoes, phew. What to do with them? I’ve also made lots of green fried tomatoes, but you can only eat so many green tomatoes (actually they have solanine, which you can’t eat too much of at once). So yesterday we spent a good time making and canning chow chow. I used a recipe that calls for cabbage, but we substituted the peppers instead. Chow chow is excellent in a bowl of split-pea or bean soup. We made four quarts last night. We’re just going to pickle the rest of the tomatoes with quarter onions and carrots, and call it a day. Then we’ll give it to neighbors/friends. Then I think we’ll be done with all the veggies above, and my next project is to paint the room and turn it into a proper dining room.

After the dining room, and once we get our good dehumidifier in the basement, our next project will be the downstairs bedroom. I am probably repeating myself, but it’s exciting to own a house and put your work into it to make it exactly how you want it.  I’ve done a bit of autumn decorating in the living room–and in the photo below you can also see the wood stove burning in the background as well as me with my old flannel robe, which is really my husband’s, but I inherited it. It’s warm, baggy, and comfy. His mom made it a long time ago. 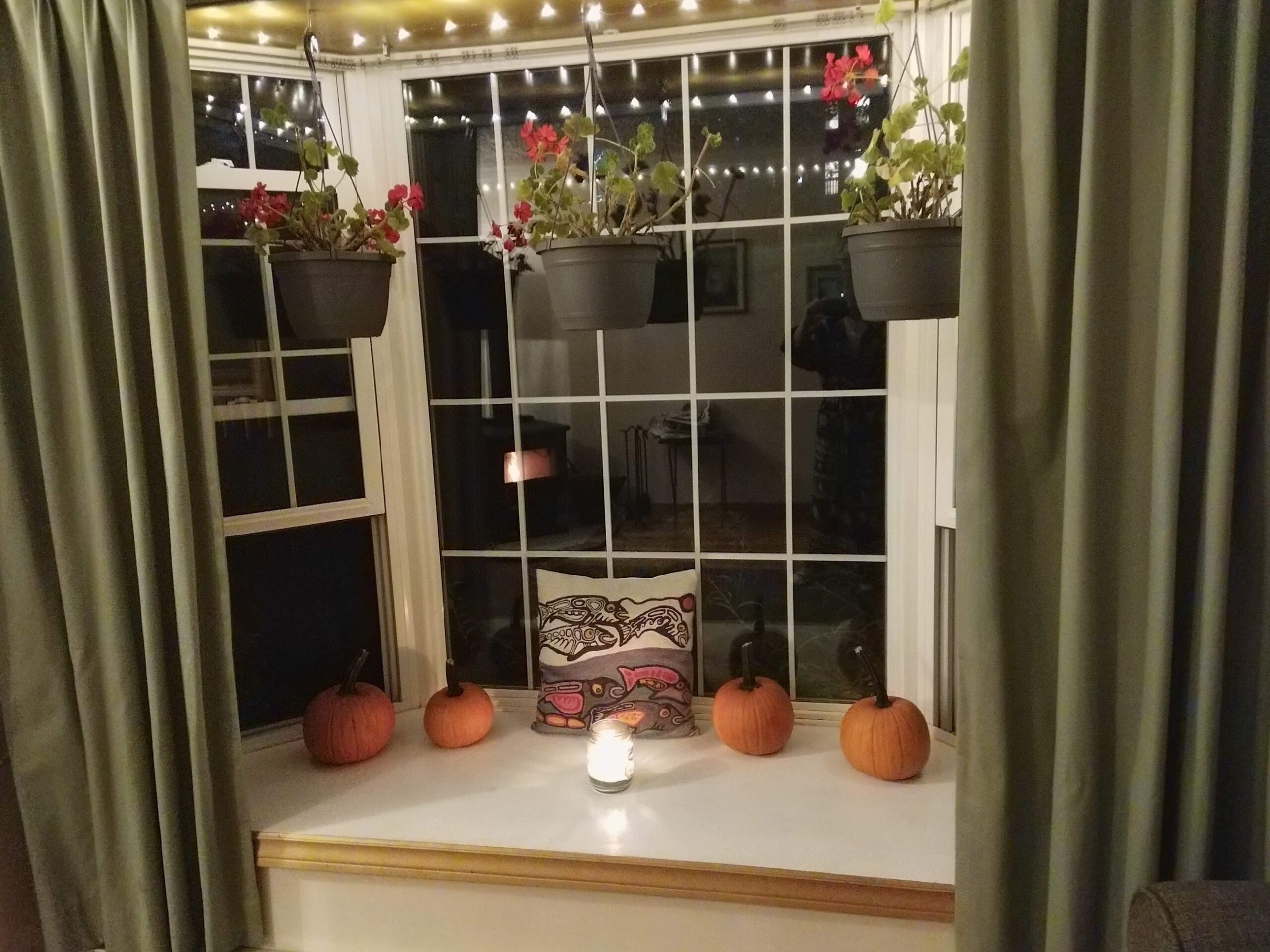 I have to say that we really do like life simple and inexpensive. Most of our purchases, such as the solar panels and wood stove, are practical and functional and will help us save money on energy costs. The wood stove is nice for cold winter nights and the ambience, but we mostly got it for when the power goes out so that we can stay warm and even cook food on it. Both purchases gave back environmentally based rebates; the rebate for the solar panels almost bought the wood stove. Other than that, we have been just buying used furniture here and there. There’s a thrift shop down the road where I found a pair of rustic looking dining room chairs, which will go nicely on each end of our dining table–other than that, the seating is benches. I’m doing American Thanksgiving in November, and we’ll have eight guests, I think. So we kinda needed those chairs!

Anyway, it’s a simple life. We have a great time just taking hikes nearby or watching the yard, which is now flanked by trees changing color–and the meadow itself is turning golden and brown. On Thursday evening I sat outside watching the stars come out one by one, while talking with Mom and drinking a pumpkin ale. Morgan was still working as he’s still on west coast time. We have our date nights too, where we’ll turn on the fairy lights in the living room, maybe light the stove, chat, or play a game like Scattegories or Trivial Pursuit. Yesterday we went out to run a few errands and admire the way that trees are changing here in Nova Scotia. It is truly beautiful! Outside of the rain and wind we had when Teddy passed on, we’ve had some excellent sunny, warm days, including today. I don’t want fall to end.

Well, I think it’s time to get back to those tomatoes now. I cleaned out more quart jars earlier this morning. Just need to sterilize them, cut up tons of tomatoes, onions, and carrots, and finish off some canning.