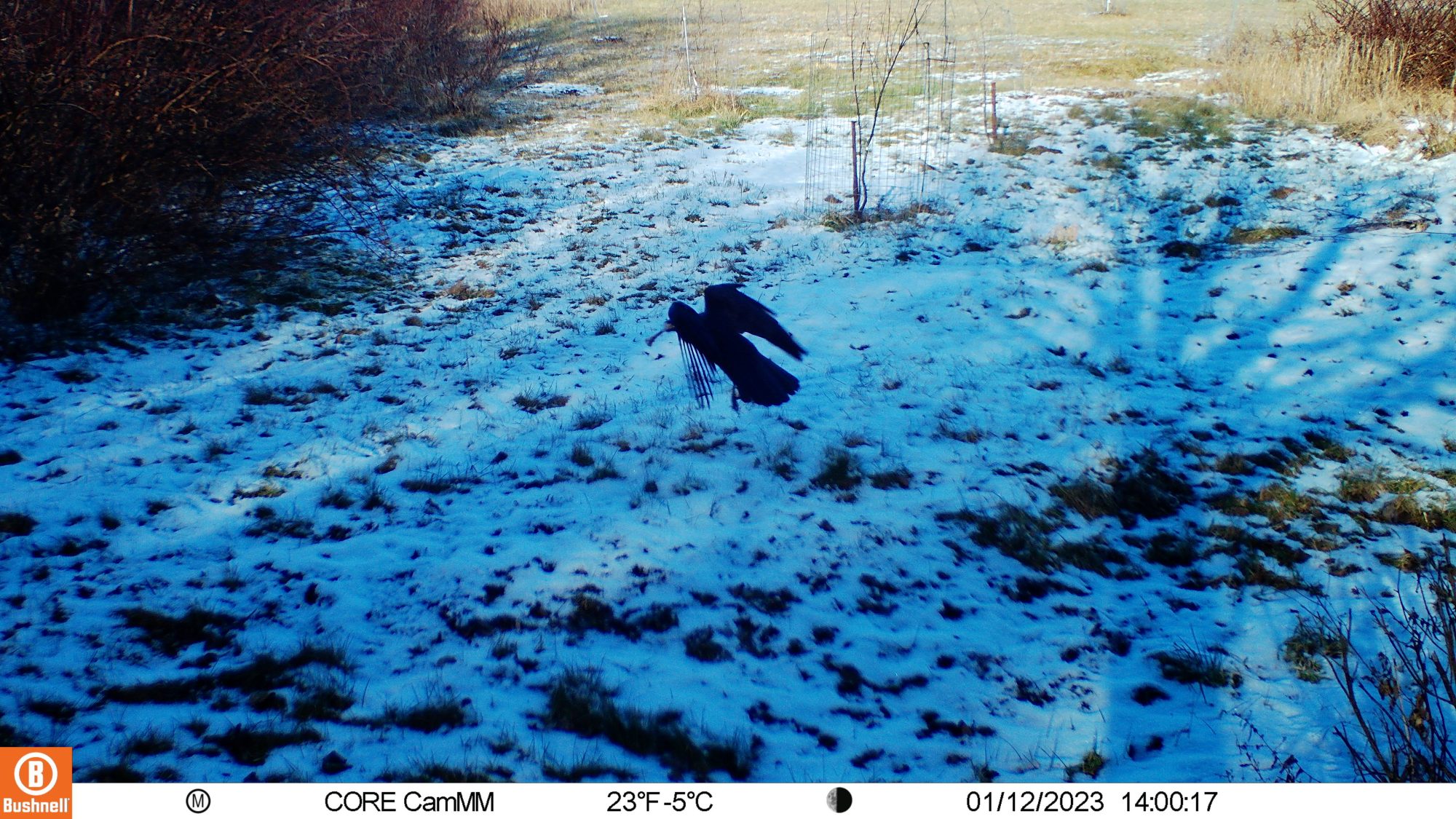 My family is so thoughtful when giving stuff for winter holidays. They know me. I get stuff like books, music, socks, and candles. My relatives send me gifts from local places, home-made gifts, etc. I’m the same way and prefer to make stuff myself or order from Etsy to send to those I also love. One of my favorite new toys this year was a trailcam that my husband bought. When we moved to Nova Scotia nearly three years ago, our goals were practical. We wanted some land, not too much, but just enough (around two acres). We wanted to plant trees, and we wanted to grow a garden each year. We wanted to attract wildlife to the yard and ensure we participated in rewilding our locality. Nova Scotia housing was extremely affordable back then, though, unbeknownst to us at the time was that the coranavirus would hit the world. Our house buying preceded Covid, but I finally flew out first to settle everything, and the weekend I flew came one day after the pandemic became official. During my first couple weeks here, as I awaited my husband to join me, I was alone in a house in a rural area on the edge of urbanity (neighborhood in front of us, nothing much behind but a lake, many forests, and the occasional residence), howling winds, and enough snow that I had to go outside and shovel a lot. During those two weeks, I had to isolate, even though thankfully I didn’t get sick, so could only grocery-shop doing curb-site pickup. The isolation was real, but our realtor, some friends my husband knew form work (who had moved out from the Vancouver office a year prior), the previous owner’s daughters, and our neighbors texted a lot to see if I needed anything. My in-laws called almost daily. I was content to enjoy the empty new house, walk the property, and make things like a tiny desk and a home-made mask. I remember when the bed was delivered. Even though I’d shoveled the long walk, two burly guys insisted they couldn’t bring the box down. They left, and I went out to get that thing down a set of stairs, down the long walk, and into the front door.

What I remember most is the wailing wind and creepy sounds as well as the stone statues in the snow-covered gardens. The statues reflected the silence (except for the wind) surrounding me.

Since that time, we know that each spring comes late to Nova Scotia and it can even snow in May. We always plant the garden at the first of June, and each year we plant different things, though I’ve always grown green beans, tomatoes, and various herbs. I’ve added beets and turnips to the “every spring” plant. We’ve seen a lot of wildlife in the meadow out back but wondered why we hadn’t seen any coyotes or foxes or even raccoons. I’d wanted a trailcam ever since watching Jeff VanderMeer’s Twitter feed. I no longer check Twitter, but am on Mastodon. His wildlife was so constant, he named almost each animal. The only one we’ve named so far was Charlie, the resident seagull. The previous owners named him JR, but that name didn’t seem right. The previous owners fed him chicken hotdogs. I knew that was bad for seagulls, so gave him suet instead, but he ignores it. He still comes to the balcony, like if he can smell our Thanksgiving meal or during springtime, but he’s never satisfied with the suet, so we see less of him now. We do not feed animals; there is no need to. The meadow is absolutely abundant with all kinds of grasses, flowers and fruits, trees, and so on. The deer coming into our yard find vegetation off the ground, including apples. In fact, even though we’ve harvested apples for cider, mulled wine, and crisps, we have too many apples that drop, which is too much for even the deer to eat. There’s no reason to feed animals processed foods. Or really anything. Kids, don’t let your cats outside and don’t feed the animals or the birds.

I’ve had a blast with the trailcam. On Christmas day, I set it up and strapped it onto our hawthorn tree, which stands in a line with three spruces and some wild grapes, sort of dividing the rose garden and other gardens close to the house with the meadow further back. In the very back are beehives that our friend owns. The deer really only come up closer to the house if they want fallen apples and pears in the late summer and fall. The fruit trees stand near our garden and before the treeline that divides the gardens with the meadow. The rest of the time they hang out in the meadow. The meadow is an area of wild grasses and about 40 trees we planted. Knowing we had deer, we put fencing around the trees so the deer wouldn’t nibble on bark or young shoots and kill the trees. There’s so much else for them out there. The trailcam faces the meadow, and we’re finally able to see what’s coming into that part of the property. You can can view the few videos added to my Meadowcam account. On Fridays I bring in the SD card and upload the stills and short (10-second) videos to my computer. I have a routine. Copy over the files from the past week. Don’t look at them yet! Remove the SD card, take it back outside, put it back in the trailcam, and then turn the camera on. Only then do I allow myself to sit down and eagerly go through the photos and videos. It’s a real treat, wondering what is newly caught.

Today when I went back outside a large buck and a doe were out there. I guess it’s still mating season here (?) due to our whacky, warm weather, but the big buck was not afraid of me at all. I whistled to it, and it just looked at me, like who are you and what do you want? I called my husband to come out. He’s six feet four. Bucks in mating season can be aggressive. We waited until the deer moved to the back of the meadow before putting the card back in the camera. They did not bother us, and we did not bother them. I was excited, like each Friday lately, to come back inside and look to see what had shown up in the past week.

The first two weeks we saw deer, a raccoon, and crows, the normal stuff (though that’s the first raccoon we’ve actually seen in our meadow). The third week were some new things, a couple coyotes and a fox. I was so excited. Then today we saw two foxes, one dark and one light. Maybe they are silver foxes? It’s hard to tell their true color, but I think there are only red foxes in Nova Scotia. You tell me: