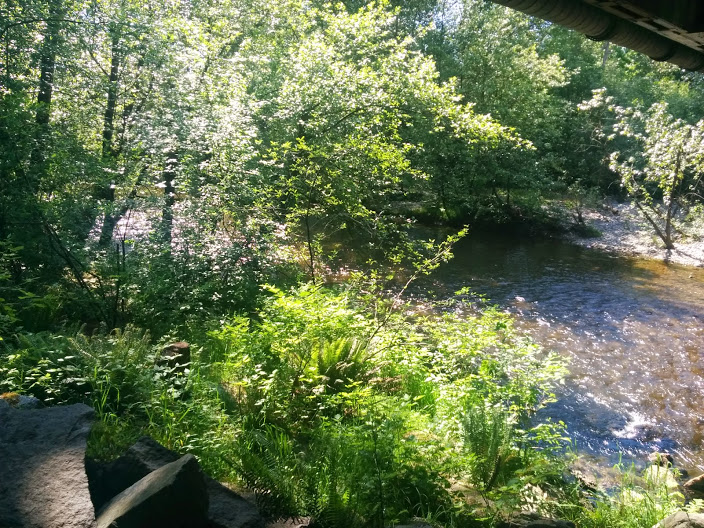 It feels like summer already, though we still have nearly a month before summer officially begins. Just having begun my fourth week in the 10K training program I am wondering if I chose the wrong time of the year to do this. Not that it’s even too hot yet. We’re getting up to the mid to high 20s C (or 70s F). Walking outside is extremely pleasant. I realize how much I love this weather too; normally we’d still be in the rainy season, but it has been warm and dry in the past week at least, with a few misty days before that. I am outside every chance I get, the warm sun turning me slowly brown. I’ve planted tomatoes, onions, sage, zucchini, green peppers, and some lilies, heather, and a honeysuckle, which I’m training to climb up a post. I have yet to plant leaf lettuce and cilantro, two things we love to eat.

I have found that when I run (around 11:00 on weekdays, a bit earlier on the weekends), I am not quite used to the heat. I didn’t run over the weekend due to sleeping on a shoulder weird, and instead ran on Monday (which was a holiday in Canada). I started out around 10:00 am or so, and ran up a hill. I felt good running, but at the top of the hill had to stop at a light, and there I began to feel very lightheaded and queasy. I walked across the crosswalk area when the light turned, and, rather than running further as planned, decided to head back closer to home–at least this time I got to run downhill. I again felt dizzy about half way down.

I was working on my 40 minute run but only got 24 minutes in before deciding to call it a day. I went home, took a shower, and decided to sit outside. Maybe I just need to get used to the heat better when running; it doesn’t bother me at all being outside when not running. In fact, I like being in the sun, whereas others like the shade. Later that afternoon we went over to a park near the Coquitlam River, and I finished out my run, but not without having to stop twice just to catch my breath.

Summer running is definitely something I will have to get used to! Even today (the first run of the week has so far just been a 20-minute run), I noticed my energy draining way sooner than usual. I cannot imagine running in the kind of humid heat they have in the Midwest, where I grew up, or the very hot weather in the southwest. If anything, I should count my lucky stars that I live in a place that is milder than most. Summers here are generally not too hot–just perfect!

My province, British Columbia, is already being affected by climate change, however. When many talk about climate effects, they point to economy (failing ski resorts, lower agricultural yields, etc.), but for the runner or other outdoor athlete, a warmer and wetter climate is expected, with summer potentially being dryer and the rest of the seasons wetter. CBC has a report that this year our weather will be hotter than normal due to warming waters and the Pacific Decadal Oscillation (PDO). The downside is the potential for more wildfires as well as species’ continued non-adaption to warmer water and air.

Is this a good time to bring some politics into this discussion? While ignoring the Albertan oil sands contribution to climate change, Canadian Prime Minister Stephen Harper’s greenhouse gas reduction goals make up “an unambitious target we won’t even hit” (Globe and Mail). I would have hoped that this country would help lead the way toward something more positive.

Warming will continue to change the way we do everything. While I’m pessimistic about timely changes actually happening, in order to reduce our emissions, I try to remain positive that we as humans might be able to adapt to a changing world–but not without great loss among other life in our ecosystems, including a lot of people as well. In the meantime, for runners adapting to heat–whether due to climate change or normal summer heat–Runners World has some great tips. I have already switched to shorts and drink plenty of fluids the night before and morning of the run, but have to stay away from sugary drinks like Gatorade (is there diet Gatorade?). I’m going to plan my runs with better shade as well, and am thinking about whether I can force myself to wake up at 5:30 am on workdays so I can run before work!