I’ll never forget my fascination with the first video games I ever played: Red Alert, Baldur’s Gate, Neverwinter Nights, Diablo I and II, and, eventually World of Warcraft (WoW)–to name a few. The kind of interaction offered in these lore-based games seemed like a good alternative to just sitting around watching something on T.V. As a storyteller and story lover, I found something tactile and exploratory about these games. I have always been, and still am, floored by the depth of some of these worlds, their historical references, and their nods to other lore, such as that of Tolkien’s high-fantasy worlds.

I finally focused on World of Warcraft as being my go-to game. At times, I got burned out and would try other similar titles, such as Warhammer, Rift, and Guild Wars, but would always go back to WoW because it had better animation, logic, and so on. Even the game’s graphical design improved over the years. Yet, I also stopped seriously playing the game after Wrath of the Lich King’s expansion. I would go back and try newer expansions of the game, but they never stuck. In a modern world of micro-transactions, cosmetic things that seemed pointless, I found newer WoW headed in that direction and didn’t really like it. There’s a point at which too many “things” mirrors the downfall in our modern world and goes away from an earlier, seemingly more simple time. Think Hobbits.

There were many years I didn’t have time to regularly play a game, but something always drew me back. And then, when the earliest Classic version of WoW came back around, I jumped on it. But even then, it took me a while to find the time to level and join a raiding guild. I was super busy at work. My first guild was horde, and it was with a big, diverse group of people I’d known or been acquainted with on a forum for years–some of whom I’d probably played the first iteration of WoW with, back in 2005. And then we moved to Halifax, to a much later time zone, and they raided too late for me. I ended up for a good year or more raiding with an alliance guild that played closer to my time zone, and played my dream class–a resto druid–and finally completed the original Naxx raid, which I had never done the first time around. I got the best gear possible eventually, and really loved that guild. It was run by women, mostly, and they were the best players I’d seen. They were also accepting of LGBTQ and did not allow any hate speech or intolerance. It was a perfect fit for me.

However, that guild fell apart in my eyes when Classic ended and TBC started, due to the level-headed guild leader stepping down and some drama/toxic behavior happening. I was still good friends with a few in the guild, but one person in particular was trying to control everything and began treating longtime raiders as inferior for some reason. I’d avoided those types of guilds thus far. At the same time, real life seemed to go nuts, and I stepped down. I figured I’d never play again, really. But I eventually checked out my old horde guild, and they were big enough to have six raid teams now, some of them raiding much earlier than their old raids. I began playing there again and was accepted to a raid team as a horde resto druid (think tauren cow woman!). It felt good. I was never the type to live in the game or be hopelessly addicted to it, but raiding one or two nights a week for a shorter time period than before worked out well for me. It was a nice hobby, something I enjoyed doing. 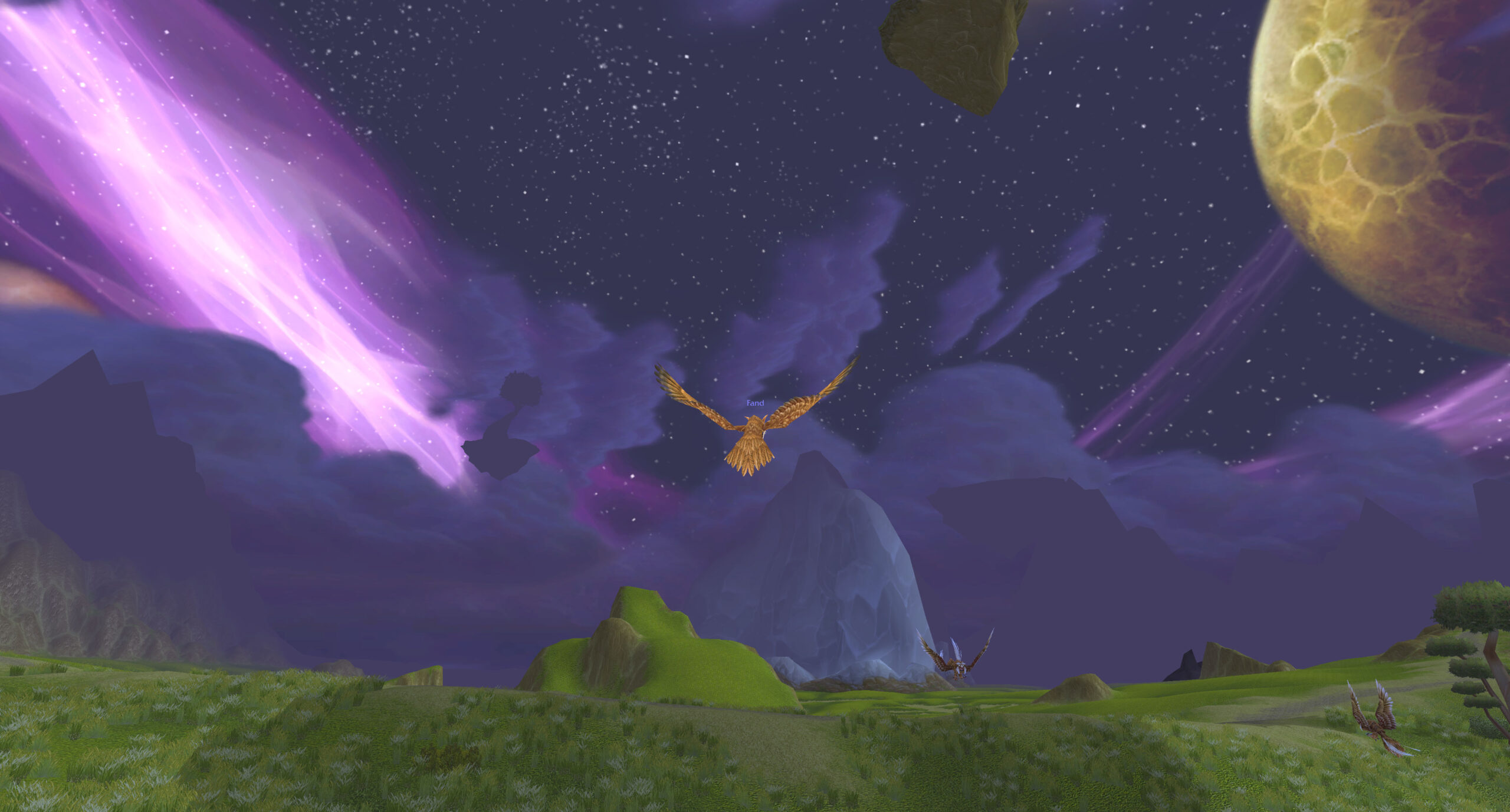 My druid, in flight form, flying in TBC

This week, however, came the news that the state of California was suing Activision/Blizzard (the owners of WoW and other games) for sexual harassment and discrimination.

As a product of this “frat boy” culture, women were subjected to numerous sexual comments and advances, groping and unwanted physical touching, and other forms of harassment. A female employee noted that random male employees would approach her on Defendants’ work site and comment on her breasts. Female employees working for the World of Warcraft team noted that male employees and supervisors would hit on them, make derogatory comments about rape, and otherwise engage in demeaning behavior. This behavior was known to supervisors and indeed encouraged by them, including a male supervisor openly encouraging a male subordinate to “buy” a prostitute to cure his bad mood.

My raid leader posted about it, and there’s been conversation about what’s happening with our game. Lots of us decided to no longer play. How could I possibly support that company in any way, shape, or form? I’ve been aware of this frat culture forever, but it’s something that instead of lingering in many instances is being replaced by more tolerance and wisdom, and I, perhaps very naively, thought WoW’s company wasn’t that way. It was a no-brainer to cancel my subscription and quit playing. That it’s happening around the time I’ve finally had it with Amazon and am moving away from them is just making me question any ties to larger corporations. I don’t support the following:

It’s only with consumers’ wallets that things will ever change.

Still, I will miss gaming, though WoW was getting old to me. There’s only so many times you can play the same content over and over from 15 years prior. There’s nothing newly exploratory in the Classic part of the game, for me anyway.

I think a great outcome would be for the better employees at Activision/Blizzard to found a new company and go back to trying to re-create the types of high-fantasy MMO’s from 15-20 years ago but do so in a story-centric way, where lore, exploration, and game play is fresh and new, and where Things and cosmetics and micro-transactions are not a part of the gameplay. Is this a dream of mine? Probably.

There’s still other games that might be worth trying. I did like the classes and roles in Final Fantasy IX, but the models looked pretty dumb, and I found the game confusing to find your way around. Lord of the Rings is another possibility, but the company has also moved to micro-transactions, which I don’t like. So there’s a lot of things you cannot do if you just have a game subscription. Valheim is a lot of fun, but it’s hard to solo-play, and our group (my husband and some friends back in Vancouver) stopped playing. I’ll be checking out other games though.

PreviousPrevious post: For the Love of Books
NextNext post:Book Orders