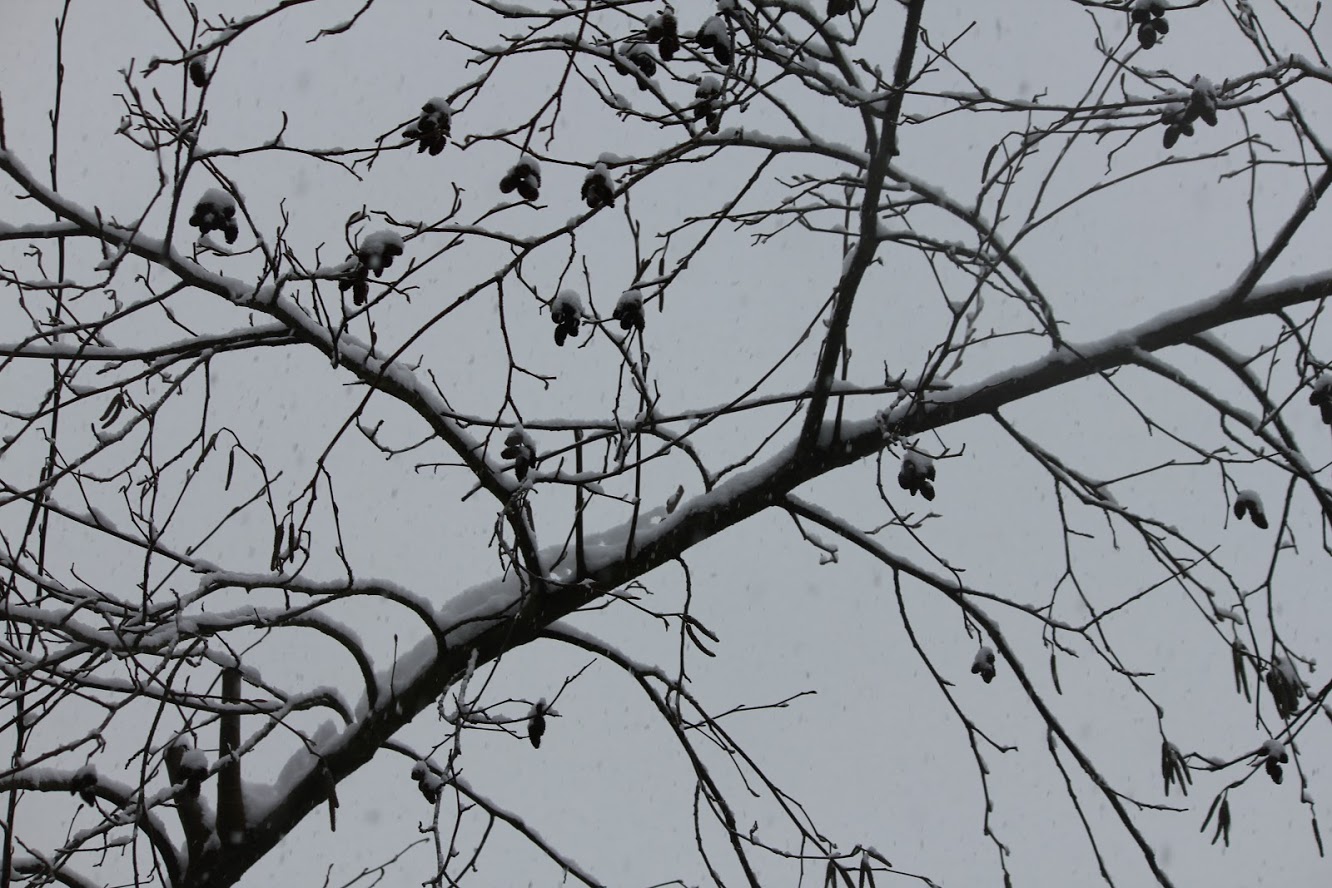 This morning I took transit to work since it has been super cold and somewhat snowy and there are still icy patches here and there on the roads. At one point the train passed a forest, and it was just in an instance my mind went away from reality as I got caught up in imagination–the forest was dark and cold and just coming to bare light beneath a slowly bluing sky, where a dark silky indigo hovered above while in the forest itself stood tall bare trees with snow heaving to their lower trunks, but only for an instance. I had wanted it to go on forever, which no forest does now. Then I was back in the world of high rises twinkling with lights under the ancient and near black sky.  I went back to reading on my Kindle, which happens to be The Very Best of Caitlín R. Kiernan.

The year has been bittersweet so far. I don’t like to post very private things here, but of course some things are super sweet. The move to Halifax is getting real. We have a broker, a realtor, and I’ve put in my notice at work and have 30 more working days after today. We’ve begun giving away clothes and doing some deep “spring” cleaning. We have an auction date set and a tentative timeline and appointment to ship our car out there. This busyness is also why I have been quieter on social media and on the blog. Meanwhile, the cold winter settles and creaks around the house. At first the new year came in with warmer temperatures and a ton of rain. I thought we’d flood. I hadn’t even had a dry day to go sweep out the multiple leaves gathered on the back deck. Looking out the door reminds me of lost ruins. Then the snows came, and now it is so cold it reminds me of when I lived in Chicago.

The bitter side: my family is experiencing a profound loss that came as a surprise on Christmas day. Separate from that is the health of my one living parent, and it seems like it may be similar to a repeat of what we went through with Dad. Then if I pan out to the world, Australia is burning. Climate change isn’t just a future thing. It’s already here, and we are living through it, and people in the mainstream are generally just tired of talking about it or are in some kind of denial and don’t talk about it. My colleagues out in Australia, who I’ve worked with for a while now in the literary world, and who run Stormbird Press (an affiliate that’s acquiring several of my old books from Moon Willow), posted the other day on Facebook:

It is with great sadness that I share the fate of Stormbird Press. The office building, Margi and Geoff Prideaux’s home (the founders of Stormbird who have spent almost three decades working on the front lines of wildlife conservation) and their large property which has served as an important wildlife habitat has been lost to the fires ravaging Kangaroo Island.

Margi and Geoff as well as all Stormbird staff are exhausted but safe. After weeks of helping to fight fires across the island they are now recovering in the homes of friends and community members or evacuation centres. All are humbled by the strength of community support. They join the CFS, farmers, the Army, the Red Cross and a host of veterinarians and wildlife carers and conservation groups who are working tirelessly to protect properties and livelihoods, most importantly keep people safe, and help injured wildlife.

The fire season is not over. This is the new normal—unpredictable and unprecedented fires, floods, heatwaves and devastating species loss.

A huge thank you to our fantastic fire fighters and the hundreds of farm fire units fighting the flames every day. These are the warriors who are actually facing our climate emergency while our leaders continue to flounder.

From deep within our hearts—thank you.

I also heard recently that my friend John Atcheson was killed in a car accident. You can read more at Common Dreams. When I began the site about eco-fiction, I read John’s book A Being Darkly Wise. I really fell in love with the story. It was set in British Columbia, and John had such a rich background, including with the government in the EPA, and was both outspoken and passionate about the environment and our place in it. He was so knowledgeable. Our first interview was in the fall of 2014, and I reiterated some of that conversation in a climate change author spotlight in 2017, this time talking about newer books in the series, a new nonfiction book he’d just published, and kind of the normal political stuff around Trump. I’d decided to do a second edition of Winds of Change this fall, and I will dedicate it to him. He’d also contributed a short story that, among other stories in the anthology, received high kudos from English professors at the University of Minnesota who used these stories in a book about teaching writing about climate change. They also used the stories in their own classes.

It is life though. Gain and loss. The loss in our family has once again drawn many of us together and it’s been like old home time, with long conversations between us. I sometimes walk around the house talking, phone in hand, fire place on, trying to get warm, as we work this out together. Good times and bad times.

Anyway, I sit here this morning trying to fight the cold, dreaming of a summer full of cricket and bullfrog sounds in Halifax and all that lovely green that will embrace the world.