There’s nothing in the world more powerful than a good story. Nothing can defeat it.

I am usually fascinated by other people’s stories. I feel pretty humbled about my own story, but also figure it might be as interesting as someone else’s. I think this is true of most writers. We like to share stories–ours, the world’s, or imaginary ones. Not only do we write, but we live our stories. The older I get, the more I feel more solidified in my own thing. I am a wife, mother, daughter, cousin, sister, aunt, friend. I write fiction. I live somewhere beautiful: coastal British Columbia. I’ve experienced a lot of exploration in my life–with people, travel, and interesting situations (learning to surf, trailrunning, paddling down a river in northern BC to watch for grizzlies, volunteering for river non-profits and dissecting dead salmon to show children the anatomy of fish, etc.). My early story consists of memories I still clutch on to, for they molded the adult me. I miss my dad every single day. I miss our life before his sickness and feel very fortunate to have had that growing up. I’ve written so much about those times in my blog. My marriage is perfect. I don’t know if most people would or could say that, but it is. I think it’s karma for several previous abusive relationships. My kids are growing into people with the same values as me–their favorite past-times are being outdoors: biking, hiking, spending time at a mountainous lake. My early dreams led to this story becoming real, but it was a rough road getting here and not without major strife, especially during my earlier adult years. These riches I have are not related to money or power, rather are made possible because of rewarding relationships.

I’ve tried reading stories on Twitter. Having spent years now on various social media, I tire of it sometimes, and I’m cynical about abbreviated tidbits pretending to be stories. In Octavia Butler’s Parable of the Talents, in the future world where Talents takes place, Butler created a news source where a bulleted note about war and a comment about Christmas lights might carry the same weight in 25 words or less. It’s the quick speed of Twitter, which shows our short attention spans and lack of retention and the imbalanced weight of matter vs. meaning that I find an odd sensation in our society. The quick information is beneficial for movements, but as for storytelling lacks completely, because if there is a story, it’s behind a link–a separate medium.

I’m fond of the quote by Edward R. Murrow: Just because your voice reaches halfway around the world doesn’t mean you are wiser than when it reached only to the end of the bar.

We could tweet the same thing as someone else who is a mild celebrity, and would receive no reaction. We could say something about war–more meaningful than Christmas lights–and the lights might draw way more attention. I’m cynical about this indifference and imbalance. I think Facebook has a slightly more standing power, way more engagement, and doesn’t move so fast. This is why I’m posting less on, and reading less of, Twitter. So if you follow me at all, you might consider switching over to my Facebook literary page, Ecology in Literature and the Arts or the one for Dragonfly Publishing (see the social media links top-left). I generally will continue trying to update eco-fiction works and announcements on Twitter, however. It’s really the blog that is my preferred medium, not for its reach but for its more meaningful way to present content.

So, I was thinking of interesting stories, regardless of who writes them. I like telling mine from time to time. It has been about a month or so since I last blogged–but I just like to write and know that some people follow my blog, as I follow theirs as well. Between term start and gaming (Classic Wow has arrived!), most of my time–outside of my fiction writing and family time–is nonexistent.

I’m starting to come up for air now, and I’m happy it’s Friday. We’ve had a very warm week for September, but this weekend it’s supposed to cool down and rain. Hints of fall are here, and yes I am an absolute sucker for pumpkin spice, falling leaves, the golden light of autumn, cooler temperatures, frost on pumpkins, getting ready for two Thanksgivings (Canadian–actually we’ll be in Nevada that weekend and American, where I do a big thing). We’re also doing an Octoberfest party on the 5th, and on the 8th I will be doing two ecofiction presentations at the 2019 Ecocity Summit in Vancouver. So I’m really excited to go through this season. Rather than rushing through,  however, to me it’s all about the calm, the holding onto each sunlit or rainy hour as it happens. I believe in living for the moment, not the future. I’m looking forward to things, for sure, but now is also full of planning, thinking, dreaming. The story gains focus to specific moments, not just who I am on a large scale.

Work has been busy, but I’m getting a new office that’s more private and has lots of windows, so I’m excited by that because I often work one on one with students. There’s also currently a lot of construction around campus. While I could continue to park near the building, I’ve decided to avoid the construction congestion and park in the back 40, over by my old running trails, through the woods and along the creek. It brings me great joy to do a little hike each morning, especially this time of year. The rowan trees have bright orange berries. A slight chill surrounds my walks each morning, a perfect breath of coming winter sneaking through the air before the afternoon sun heats everything up. Dried leaves are blowing off trees; some of this is because autumn is coming. But also, due to hotter, dryer summers, our trees get more stressed and drop their leaves, even in summer. 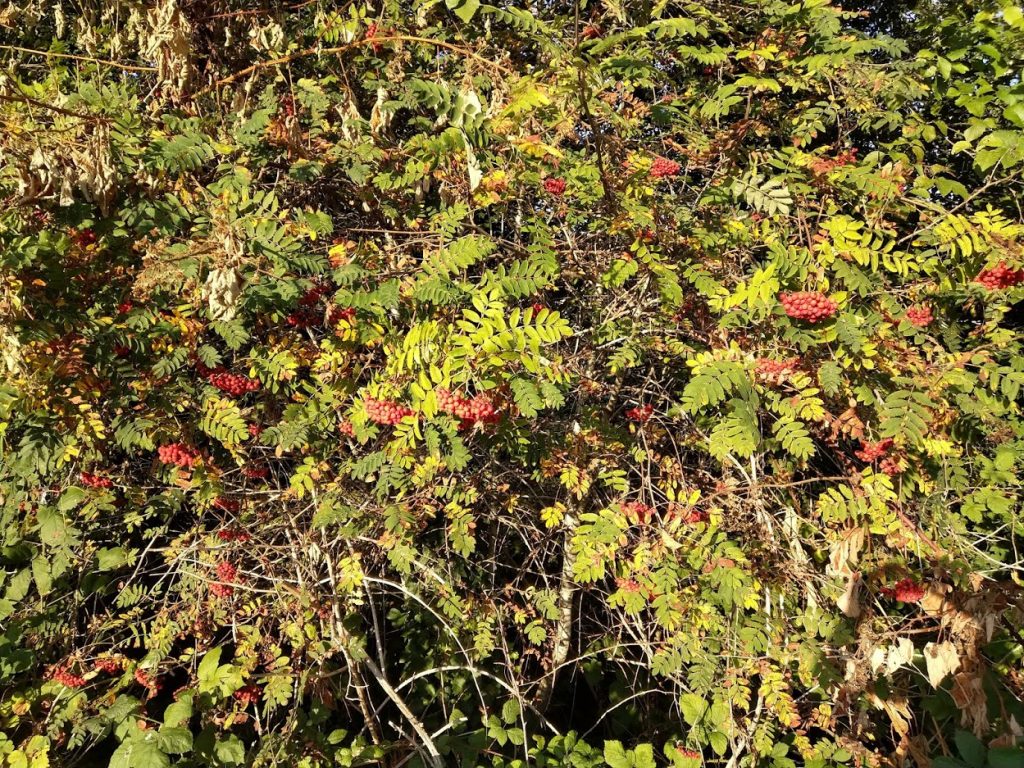 Rowan tree along the morning hike 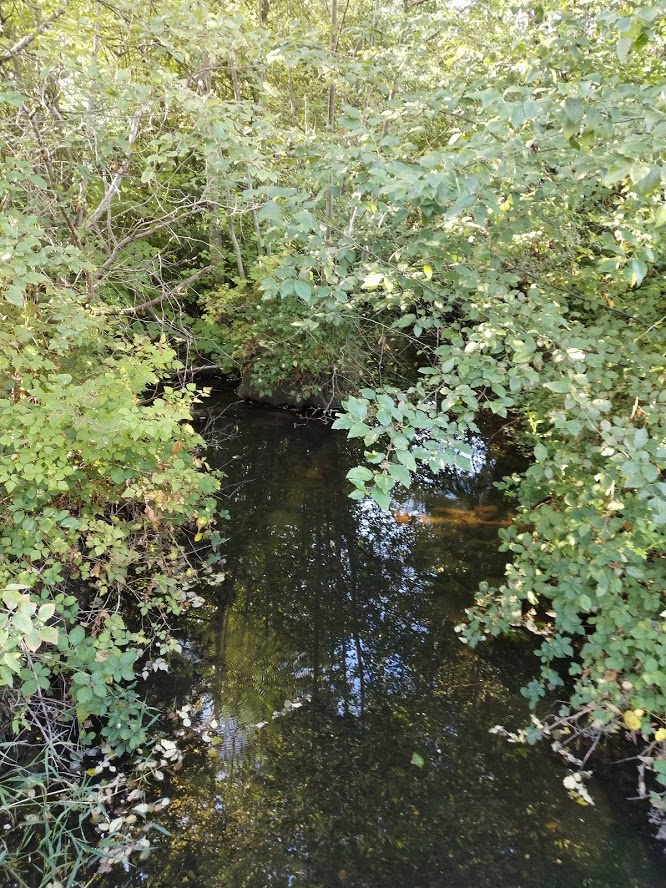 The creek in the morning 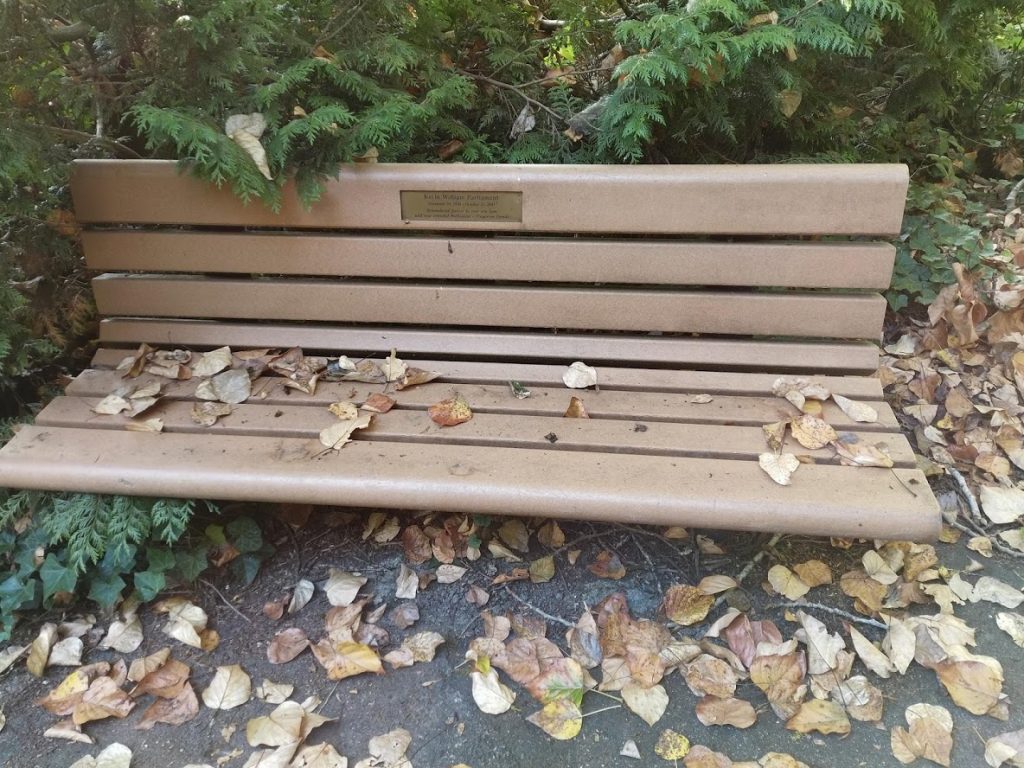 I mentioned Classic Wow before in this blog, another part of my real story. I am playing a druid whose character name is a reference to Jenny of Oldstones. When I first began playing last week, to get in the mood of my character, I listened to “Jenny’s Song,” from one of my favorite Game of Thrones Season 8 episodes–where they’re sitting around the fire, drinking wine, and when Brienne gets knighted by Jaimie. It’s also where Podrick sings “Jenny’s Song,” a song before the big battle of the Night King. The song is an allusion to the Witch (or Ghost) of High Heart demanding travelers to sing that song in turn for telling them prophecies. Theories say that she was possibly an older version of Jenny or that she came from the Children of the Forest. To Tom of Sevenstreams, who sang the ghost (witch) “Jenny’s Song” in payment to the witch, she told several prophecies. Jenny of Oldstones was a commoner who was considered strange. She wore flowers in her hair. Locals considered her half-mad, a peasant, and even a witch. Her self-claimed heritage was of the First Men, and the castle she lived was Oldstones, which lay in ruins in the modern story. Her ghost was said to have danced there, in reminiscence of life and romance from when she was alive. Duncan Targaryen, the Prince of Dragonstone (or Dragonflies), met and fell in love with Jenny (circa 239 AC). He married her, going behind his father’s wishes, who had betrothed him to the daughter of Lyonel Baratheon, Lord of Storm’s End. I don’t role-play in game, but my character was created with Jenny of Oldstones in mind. Why? Because I was fascinated by the story of her. The entire Ice and Fire series, and its television adaption, is possibly my favorite stories of all times. We take from stories and include them in our own if we relate to them. I was healing in a dungeon a couple nights ago, and a rogue said “Jenny of Oldstones!” and I was happy someone got it. I use an abbreviation in game since the name itself is too long for what the game allows. Jenny’s story is not the loudest story from the books or show, but it reflects me in some ways: a commoner. Some might consider weird!

The majority of people in my guild are much higher level than me. I guess they do not work or something. I like the game. It allows me to come home and sit down after a long, active day, and do something almost mindless in activity but also somewhat challenging in the sense it’s a game and you can die in it, etc. But it feeds my imagination in some ways., especially in that it takes place in a Tolkien-esque world before modern industry, where although there were the beginnings of modern civilization (forging and smelting, deforestation, magics corrupting the world), many areas are of a more pristine world alive with wind, rain, snow, animals, and mythical monsters. I look forward to hitting max level. We’ll raid two evenings a week and I’m sure I’ll play other times, but really, by sometime in October I figure I’ll hit that max level and have more time for finishing Up the River, another story I’m telling, not one of me but a fictional story of a fossil fuel catastrophe in the Appalachians, a crucial place from my childhood. By the way, the new anthology Mountains Piled Upon Mountains, edited by Jessica Cory, is absolutely full of beautiful Appalachian stories–creative nonfiction, fiction, and poetry. I am in love with this book and highly recommend it.

Speaking of Appalachia, tonight I will talk with my mother for probably hours–with a few glasses of red wine, sitting on the back deck, watching the autumn foliage drift around me. It’s important to me to keep close contact with my mother, who is aging and having some issues. I already lost my dad. I cannot contemplate losing her too, though it is inevitable some day.

That’s it for the story of me currently, the stories I’m writing, living, and reading now, etc.

However, there is a dream my husband and I are exploring, and maybe it will become a new story some day. We’re considering selling most of our possessions and moving to Halifax, Nova Scotia. It depends on his job here and whether their office in Halifax has any openings similar to what my husband does now. If so, we could actually afford to buy a house there. And they have a lot of rural property with some of the ideal things we dream of, like enough land to grow a real garden, land to run in, etc. You know, like those older houses with wood-burning fireplaces, original hardwood flooring, big front porches where you can sit out during the summer and drink sweet tea. The kind of houses of my childhood but perhaps retrofitted with solar panels. And the area is near the wild Atlantic ocean below, with rocky cliffs and a sort of older mood to it than Vancouver, which is really just a rich person’s playground. It seems very similar to parts of Ireland, and is like a dream to me. That’s a story for another day.