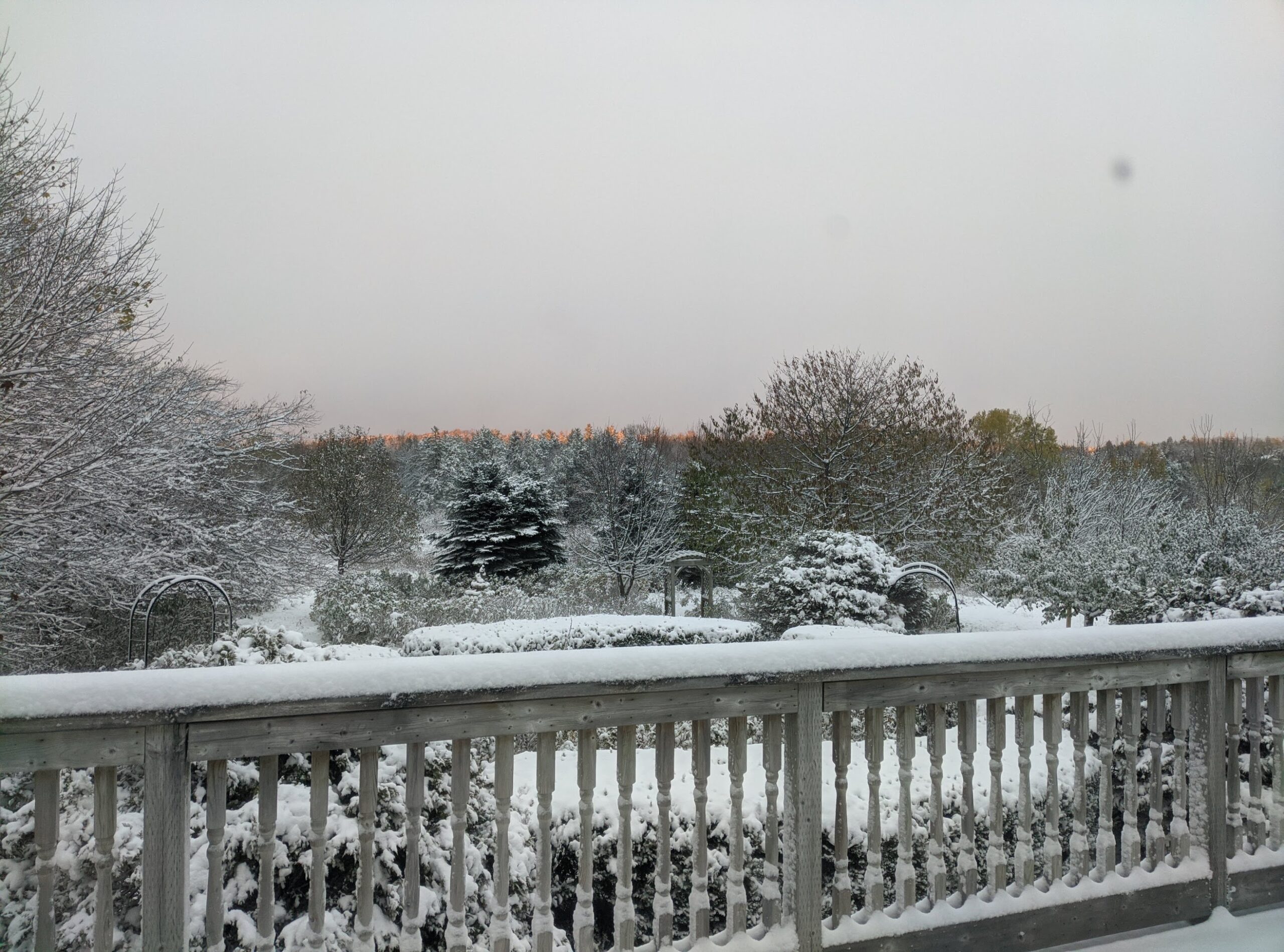 Maybe I’m just getting older, but my life swirls around the seasons. In summer, we were outside on our property more often, planting and watering new trees, planting vegetables in our garden, mulching, weeding, and watching all the deer, birds, butterflies, and other wildlife foraging in the yard. In fall, we harvested and canned things, and of course watched the deer come back–the mother was bigger and her fawns had lost their spots, and we began seeing other adults (but no bucks with antlers yet). We watched them eat fallen apples and pears. And then there wasn’t a lot to do but prepare for wintering. This past weekend we finished pulling up leftover dead bean stalks and their bamboo stakes, and any other foliage, and then prepared the garden beds with sheet mulching, by putting down a layer of cardboard and then covering it with leaves. We then threw down some branches over the leaves because it’s been super windy here. It’s great to recycle things and add value to gardens in this manner. First, we have a lot of cardboard stored in our garage from all the deliveries of things needed when we moved in. Second, instead of burning leaves or setting them out on the curb for city composting, we just recycled them for use in our own composting/mulch. Then it was nice to do something with a pile of branches that have been sitting at the end of our long driveway for a while–though this is not part of sheet mulching. It’s only to prevent the leaves from flying off. From the site I linked above:

Beneath the layers of compost materials, sheet mulches typically include a layer of cardboard to keep grass and weeds from growing through – a great way to smother unwanted vegetation or convert a sod lawn into a garden. Before long, both weeds and cardboard decompose and feed the soil with organic matter, while you pat yourself on the back for finding such a clever way to recycle and relieve yourself of the constant chore of weeding.

Another reason to try sheet mulching: earthworms love cardboard. They literally eat it and excrete “black gold” from the other end.

So in the spring, the weeds won’t come back through (though we are saving fallen leaves and more wood chips for further mulching after planting next year), our irrigation will be better and more natural, and we can use the winterized mulch as a new layer of soil in which to plant our garden in the spring. This method produces no-till gardening as well, since you don’t have to dig into the old soil, just use the new mulch as the soil to plant in. There’s a lot more to do in the spring, including building higher chicken wire fencing around our new trees and the gardens, but I’m enjoying the now. This season.

Life with coronavirus is ongoing. I don’t believe there will ever be a new normal, only a continual adaption to a weird world, which is oddly feeling cultish in the US and in other pockets of the world in which populism and propaganda are the rich’s mouthpieces. We’re also seeing worsening effects of climate change. There’s plenty to be worried about, to advocate for. But I’m also trying to focus on locally and personally positive things. I am getting back into running. I have a new dream of doing some snorkeling nearby this summer after watching My Octopus Teacher last night! I’m aware the only octopus we have around here are deep-sea ones, but I miss being in the ocean, snorkeling, and watching marine life. I feel fortunate that so far we have not been hit by tragedy. My best friend from high school lives in the states, and she has Covid-19, and her kids have also had it. Her mom just died unexpectedly last week. A family member is going through a hard time of year. Though she has plenty of offers for Thanksgiving and Christmas, we may just set up a Zoom chat on Thursday, eat, talk, and be merry. We had originally planned ours for Saturday, but do to new regulations and new community spread here in Nova Scotia, we canceled it. Some of our guests are sick too, so they couldn’t have made it. We’re just going to drop off food instead. And I’m doing Thanksgiving on Thursday instead of the previously planned Saturday. It’s a little weird, because it’s not a Canadian holiday, and my husband has to work and then he has a team-building exercise later that night (all virtual), but I figure we’d eat during his break that day and then I can be available for family later if needed. If not, I’m going to due my annual Christmas decorating. I can also do that over the weekend.

I don’t do a lot of decorating, though. I like a few lights at the front of the house, some fresh boughs (can get from my own yard), dried orange slices, and real pine cones for putting around the house, and I’m still trying to find a potted fir of some kind to put in the bay window and then plant later in the spring.  And I have a few candles. That’s it. The other night we went to the store looking for a potted tree and couldn’t find any, and on the way home drove around our neighborhood. So many people have their decorations out already. And for some reason, this year I’m really more into the winter holidays than usual. Maybe it is because I haven’t had too many social gatherings this year. Really, the only thing we’ve done with others this year were a few bonfires over the summer. But without really getting together with others for months, outside of a few occasions, it helps to see on display the brightness of how others are feeling. It’s like an extension of our spirits lightening up our lawns and sharing the Christmas spirit to those who pass by. I say Christmas, since that is the tradition I was raised in. To me, it is not really religious though. It’s more about giving and sharing warmth and expressions of joy and love during the winter solstice. Getting back to the beginning of this blog post, the seasons coordinate our way of life, and this includes weather and holidays and traditions. Outside of climate change beginning to affect things in our part of the world, there is still that continuity to hold onto, the life cycles and life styles we build around the seasonal changes–planting, growing, nurturing, harvesting, celebrating.

To me, Christmas is somewhat social–maybe not this year–but more often as I get older, it is more so a time to reflect on the peaceful snow, the mist and fog surrounding our house, the warmth of a fire inside, the taste of hot chocolate or mulled wine, the  quiet walks around the property and the sight of blue jays, cardinals, finches, and more darting through the sky and trees, the glimpse of the innocent looking faces of deer as they also see me and we have one accidental moment of connection, the soft glow of fairy lights, the diamond sparkles of snow and the way it crunches below our boots, the bountiful wood pile, the hollow trees, the evergreens painted in swaths of white, the promise of an orange sunrise breaking through the mist, and the hush of the night. These things define the holidays to me. They are what I go to after the phone calls, the opening of presents, the indoor jolly-making, the songs and films.

I haven’t even watched The Holiday yet, one of my yearly films during the season, though I did watch my other favorite, Love Actually. I am getting cards to send out, and I haven’t done that for probably a decade or more.

I just want to enjoy the now, not overcome myself with the commercialization of the season, and revel in the winter unfolding outside.