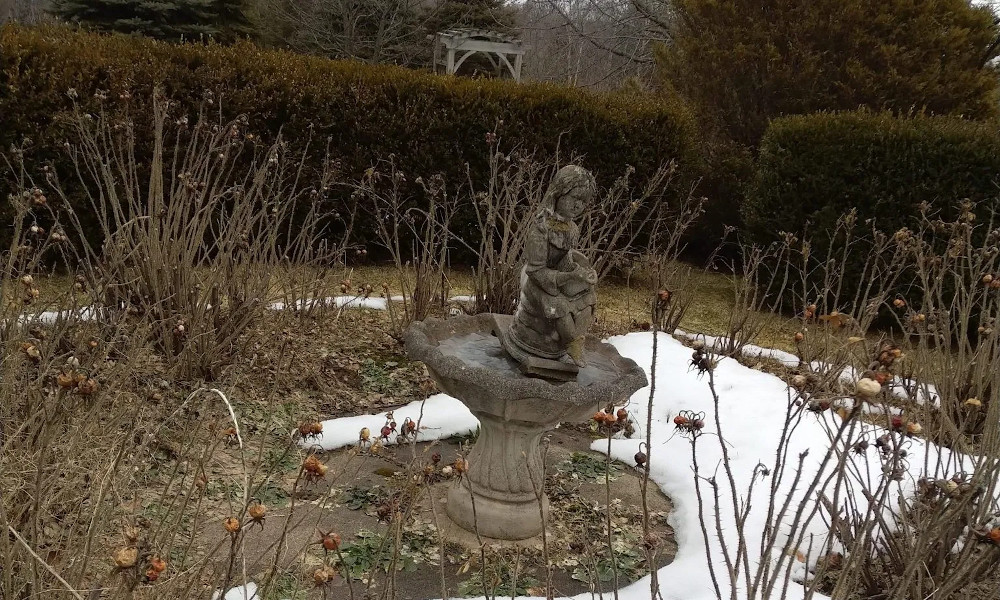 The gardens out back. I’ve spent much time walking the yard and identifying plants along with admiring the several ancient looking old-stone women statues on birdbaths. Kind of stuck in time. That’s how I feel.

I haven’t blogged for nearly two months. You see, two months ago was a lifetime ago. A different world. Not only were we in the midst of moving to Nova Scotia but the COVID-19 crisis broke out around the world. As I was making flight plans to get to Halifax earlier than my husband, to take possession of the new house while he tied things up back in Vancouver, I had no idea what was coming down the pike. I had also decided to make a pit stop in Chicago to visit my sister, who had been going through an awful time (unrelated), and see some other family. The day before I left on my multi-city trip, a pandemic was declared. I left anyway. I couldn’t not take possession of our house. In Chicago, I had great times with my family, but it was looking scary. The night before I left O’Hare, pictures went viral of the international terminal at the airport and showed thousands cramped in customs. They were from mostly Americans coming home from Europe.

I watched every single day as this crisis unfolded. In Halifax I had a hotel for one night and a rental car. Two days after I landed, Canada began enforcing two-week self-isolation from anyone who traveled. And it closed its borders to non-essential travel. I was exhausted when I got to the hotel. The next morning I requested one more night at the hotel because I was just too tired to do anything that day. I set up a B&B for two more nights since I was not to take possession of the house quite yet. However, things unraveled quickly. The B&B woman initially said we could do a contactless payment and key receipt, but she let me know a few hours later she changed her mind. The hotel would not let me stay longer, even though I was not going out at all from the room. The lawyer did not want me coming down to the city to make our down payment nor to sign final papers. I had nowhere to stay until I could get into the house.

Luckily the lawyer, realtor, and previous owner allowed me to move into the house early. My husband back in Vancouver was able to do make the payment, and the realtor came to the house and distanced from me as I signed the last paper.

So much handwashing was being done. Like so many others, my hands were red and raw.

I had no furniture. No food. Nothing but the clothes and a few bath items in my suitcase.

The previous owners dropped off a twin bed, sheets, pillow, blanket, a few utensils, coffee cup, and some baby wipes. That saved my life. My neighbors were friends with the realtor and texted nearly every day to see if I needed anything. I always said no, but thank you. They’re really nice people who I’ve only been able to talk over the balcony with.

I was able to get food by ordering from a store and picking it up contactless. I craved cereal but ate it from a coffee cup (the dishes are finally here now). I had boxes coming that Morgan had sent, and some deliveries–household goods from Amazon, a sofabed, a cedar table and chair, and a few more things. The deliveries had to wait until I was off isolation. A king size bed mattress came, and the guys said they couldn’t get it down the walk, so I went out and got that thing down the walk myself. Meanwhile, it was snowing and windy and cold!

Also, my sister had come down with coronavirus symptoms. Day by day went by, and I wondered if I or anyone else in my family would get it; thankfully nobody did, which makes me wonder if she had the flu instead. Like everywhere else in the states, you just couldn’t get tested. Every night I’d awaken suddenly to see if I had a fever; every morning I would check to see if I could breathe okay or if I felt like coughing. I was worried, due to all the airline restrictions now, that Morgan wouldn’t be able to make it out. He had to run the auction of our old stuff, ship out the cats, see to the cleaners, etc. The auction canceled due to the pandemic, so he busted his butt after work and on the weekend to sell as much as possible. Air Canada would not ship live animals anymore.  Our car, which he shipped out, is currently stuck in Ontario until trucks begin running again. Thanks to wonderful friends like Sam, Dara, Ross, Kostia, and Jeff, we had help closing down the old place while setting up here. Morgan’s work agreed to let him take his vacation early and fly out early. Every night I worried that he wouldn’t make it.

I was here with no internet service. The first one had to cancel due to isolation. I got a hold of Bell, which was supposed to install during the two-day window after my isolation was over and before Morgan got here and we’d go back into self-isolation. And when I say isolation, it is something we will continue to practice but of course we need to have food, and now that I’ve returned the rental car, that means we’ll need to take a bus. But now he’s here. And our cats are finally here, thanks to WestJet. Well, Bell never showed up or even called to install internet, so we had another service remotely get us connected and mail us a modem. For over three weeks I had no real internet, just a super crappy signal on my phone.

I found myself being resourceful: setting up furniture that arrived, making a face mask, finding stuff left behind in the garage and shed to make a temporary desk for my laptop until my computer and real desk got here, making friends with a seagull named Charlie and a few crows, walking the vast backyard and trying to identify plants, reading back on old writings I’d done throughout the years and thinking, “I should finish that story!”, unpacking, shoveling, putting things together, being creative with so little food I had gotten, and so on. I found some Abba songs on my computer and danced for an hour. I wrote a small journal of my time alone during the pandemic. I often stared into the yard, envisioning spring. I’ve seen blue jays, seagulls, crows, and pretty red bird that might have been a pine grosbeak; it didn’t look like a cardinal. Morgan saw a pheasant in the yard. I listened to the winds howl at night. The Nor’easters are real.

News around the world grew more dire by the hour. My sister felt better, but then got worse–but I think the worst is now over for and she’s in recovery.

As soon as I went off isolation, I went to pick up some wine. NSLC enforced people to stand six feet apart outside the store and only allowed five in at a time, which was great. I went to Sobey’s once in the evening, and it was absolutely dead and new things were being stocked. And I picked up Morgan from the airport. And haven’t been anywhere else, not for over a week now.  I’m rather introverted but miss being around people. The last groceries I got are nearly gone, but we really cannot go anywhere until next Tuesday or so.

This is my story in a nutshell. So far we’re alive, we’re here, we’re safe. My heart goes out to everyone in this time.