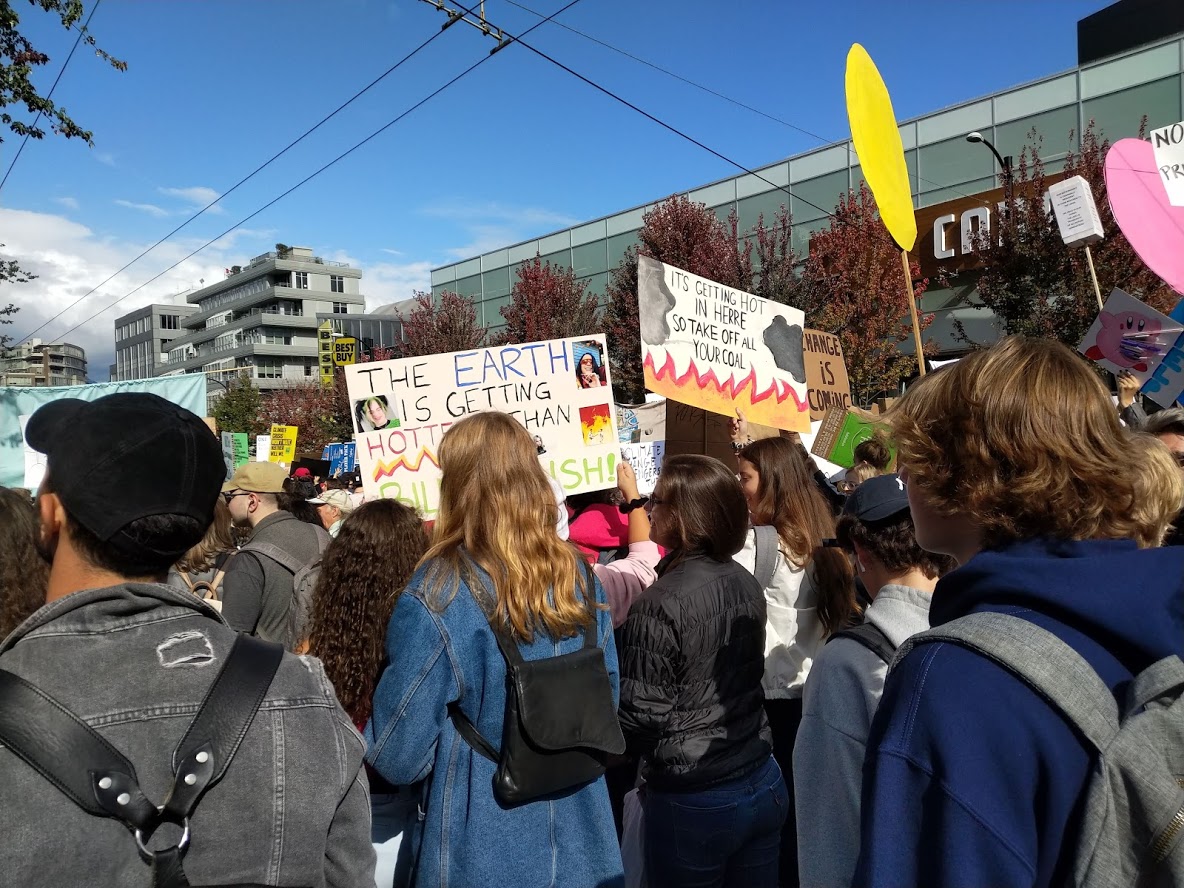 These days are filled with wonder. We either have torrential downpours felling the leaves of the mighty oaks, maples, birch, elms, and other deciduous trees–or days of sun and warmth, along with the reds, golds, browns, and yellows swirling around us like costumed fairies. It is my favorite time of year. I’m like a kid in that I still get so freakishly happy just by weather, seasonal changes, and what those changes bring each year.

The season felt like it started one week ago today, when my husband and I joined Vancouver’s Climate Strike (led by youth, a movement begun by Greta Thunberg, who began to take Fridays off from school to strike for climate–she gained a huge following). I feel old saying this, but I got big lumps in my throat watching our youngest generations’ frustrations, anger, and fear turn into acts of love and hope as they led the march. We walked just over 5K that day, and part of the walk was the same area I’ve marched before or ran in the Sun Run. The day was fortunately sunny and windy, with the crisp chill of fall and the promise of change. Some photos are below.

This march reminded me of others I’ve taken part in. I realized in over the 10 years I’ve lived in Vancouver I have participated in several protests. I joined lots of colleagues, when I worked at a non-profit, to support the health of wild salmon and protest Atlantic net fish farms in wild salmon ocean habitats. We marched a few times a year and paddled the Fraser raising awareness. We also protested dilbit pipeline expansions and Trump, including the big woman’s march in January 2017. Doesn’t seem like it’s been all that long ago. I continue to join in solidarity with others to call for action on things I believe are right.

The autumn days and nights are full of not just wonder but action to keep this old Earth always the best it can be, which includes keeping the seasons we know and love. We celebrate this weekend with some friends by hosting an Octoberfest party. Yes I just might even include some mulled wine along with the pumpkin ale, German brewski, brats, kraut, potatoes, pretzels, and strudels. Then Monday I have off work to finish preparing for my presentations at Ecocity 2019. (There’s a typo in the title of the presentation, which never got changed, despite me pointing it out to the organizers!) I’m really excited. I got to do a trial run of the short presentation earlier this week and was surprised at the support I got among colleagues. Then the weekend after the upcoming one we’ll be heading to Nevada to visit my daughter and to do some hiking at Red Rock, up in the mountains. She said it’s still quite warm there, around 90 degrees, but up in the mountains it should be cooler.

And then it seems the season will change into the bone trees and all the leaves forming on the ground, and it will be the rainy season that may also turn into a snowy season–it’s so hard to predict in Vancouver. We’re moving closer and closer to the Halifax plan, which keeps our time occupied for so much needs to be done. I will post more later if that dream turns into reality.