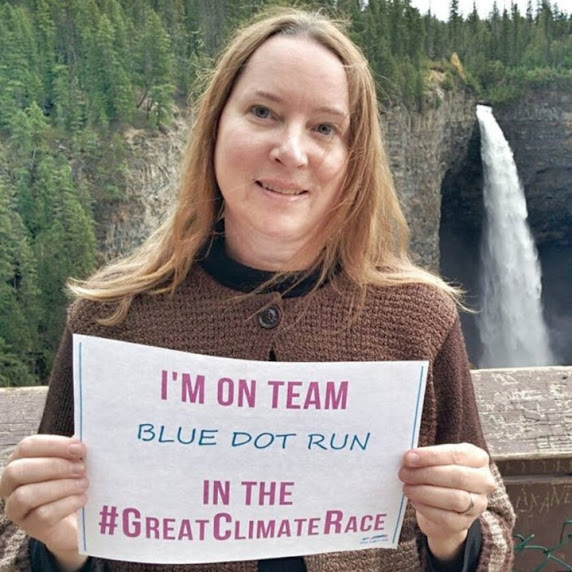 First, I have made the astonishing discovery that runners and others who exercise outdoors have made for years, and that is the magic of electrolytes. In one of my last posts in the blog I was having a tough-go of running in the heat, but putting some potassium and sodium into my diet on the morning of the run has seriously helped. I don’t eat much sugar, so first tried G2. I recently discovered another similar electrolyte liquid that comes in a small bottle; you just add drops of it to water–which is a great option since you don’t need to buy Gatorade in plastic bottles. Anyway, at just over halfway in the 10K training, last weekend was my “big” 45-minute run, and it went well. This week was recovery week. The goal is to work up to a 60-minute run, which happens in a couple weeks.

Second, our Blue Dot Run Team has its first race registration! You can follow us on Facebook, watch the website for events, or just sign up directly with our team for the Great Climate Race. If you have been reading this blog for a while, our first plan was to do an actual 5K/10K in the lower mainland to raise awareness of David Suzuki Foundation’s Blue Dot Campaign, which is a grassroots effort to get Canadian municipalities to recognize the right to a healthy environment. However, we have since modified our goals, to build a team of runners instead who can donate at different already popular and existing races–and not just for the Blue Dot Campaign but for other environmental causes.

You can imagine the thrill when I heard from Ben West the other day about the inaugural Great Climate Race (November 8 in Stanley Park), which will raise funds for the Renewable Energy Fund. The fund provides local solar energy projects for the Vancouver community. What better way to do some real climate action than running (which I love) and helping to fundraise for such a worthy environmental cause. I will say that the registration fee is a bit steep. It is discounted until May 31 and goes up after that. However, according to Renewable Energy Fund (linked above), part of the registration fee also goes toward the Renewable Energy Fund.